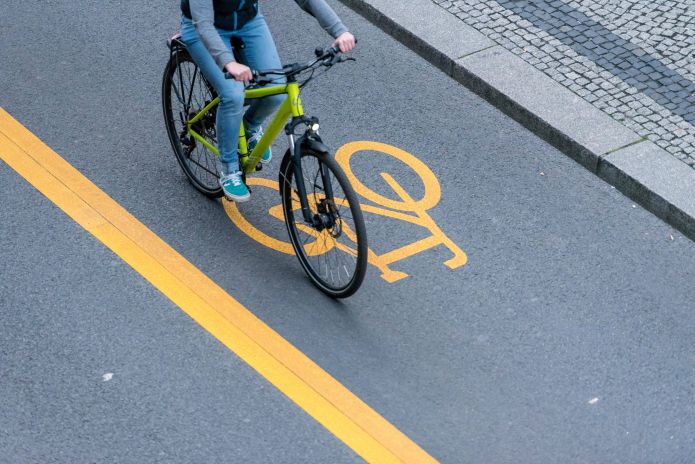 BerlinThe pop-up bike paths in Berlin that were set up during the Corona crisis are allowed to stay for the time being. The Higher Administrative Court (OVG) decided on Wednesday. The proceedings are therefore in favor of the Berlin Senate. The Higher Administrative Court thus temporarily overturned a decision of the lower court, according to which the provisional cycle paths should have been removed. The Berlin Senate had lodged an appeal against this decision.

In April, the Senate and districts began to mark the so-called pop-up cycle paths on parking lanes or car lanes and to put up appropriate signs. In many places the paths were separated by warning beacons. This was justified with the corona pandemic. Many Berliners don’t have a car, and buses and trains are too narrow.

The judges at the administrative court had raised serious doubts about the legality of these cycle paths in September. Cycle paths should only be arranged where there are specific indications of dangers in traffic and where they are absolutely necessary. These were not adequately presented by the Senate Administration.

“Taking these documents into account, the decision of the administrative court was largely incorrect in the result,” said the OVG. The separation of bicycle and road traffic serves the safety of road users. The Senate Traffic Administration made this clear by subsequently submitted reasons and data. The administrative court had previously criticized this lack of justification and therefore prompted the dismantling of the pop-up cycle paths.

According to the judges, these safety aspects outweigh the private interests of the applicant. As his own concern, he only asserted that he was unable to move through the city in the usual way due to traffic jams. The figures subsequently submitted by him to prove the alleged increase in travel time in the complaint procedure relate to the entire state of Berlin and the year 2019. They are therefore already unsuitable for documenting congestion times due to the cycle lanes only created in spring 2020 on the relevant road sections, so the judge.

The decision is final.

“Golden CD”! SO made Karl Jeroboan speechless the jury around...

“Doesn’t anyone notice that?”: ProSieben outraged “Beat the Star” viewers