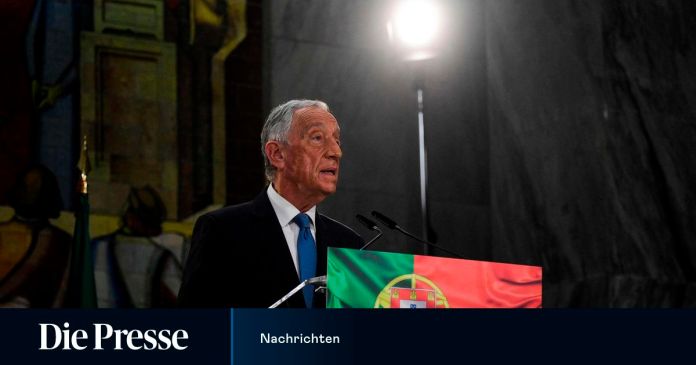 The  72-year-old former TV journalist and law professor has been re-elected with around 61 percent by 2026.

The  turnout was lower than ever before.

Portugal Head of State Marcelo Rebelo de Sousa has secured a second five-year term in the country, which is currently particularly hard hit by the corona pandemic.

The  72-year-old conservative politician came to around 61 percent in the presidential election on Sunday, as the national electoral authority announced after counting more than 99 percent of the votes.

The  former law professor and TV journalist got nine percentage points more than in his first victory five years ago. With an absolute majority, he avoided a round on February 14th.

A lot of power in Portugal

The  head of state has in Portugal a lot of power.

The  president can both veto laws and dissolve parliament and call new elections. For Portugal it was the tenth presidential election since the Carnation Revolution of 1974.

The  candidate Ana Gomes from the Socialist Party (PS) of Prime Minister António Costa landed this time with a good 12.7 percent, far behind in second place. However, she had not enjoyed the support of her party, as Costa got on very well politically with Rebelo de Sousa.

The  vote was taken by the dramatic worsening of the Corona crisis in Portugal overshadowed.

The  number of new infections per 100,000 inhabitants within seven days was recently around 750. This is one of the highest values ​​in the world.

Because of the pandemic, numerous politicians and other celebrities had called for the election to be postponed. In a survey commissioned by the weekly newspaper “Expresso”, 57 percent of the participants were in favor of a relocation.

Voter turnout was only 40 percent

Many voters probably stayed at home for fear of the virus: According to preliminary official figures, voter turnout of almost 40 percent was well below the previous record low, which was recorded in the presidential election of 2011 with 46.5 percent.

Rebelo de Sousa, who has been in office since 2016, is considered an extremely close to the people politician who, as head of state, likes to hug, kiss and comfort people on the street. Sometimes he also appears as an active helper: last August, the wiry Catholic in the Algarve rushed into the sea to help rescue two women whose kayak had capsized.

But it is not just such actions that give Rebelo de Sousa recognition and prestige. He is also highly credited for not only criticizing and controlling the left-wing government of Prime Minister António Costa as a conservative politician, but also supporting it. He attaches great importance to the country’s political stability.

The  cooperation between Rebelo and Costa, including the declaration and design of the Corona state of emergency, has worked almost smoothly so far.

A total of 10.86 million people were called to vote – including the Portuguese living abroad.

The  country of emigration, which also recorded a loss of hundreds of thousands of citizens during the euro crisis a few years ago, therefore has more voters than inhabitants (approx. 10.3 million).

Concert booker in the “endless madness” of Corona

Knappschaftskliniken make up 1.5 percent of all intensive care beds in...

SpaceX builds its own factory for Starlink satellite internet