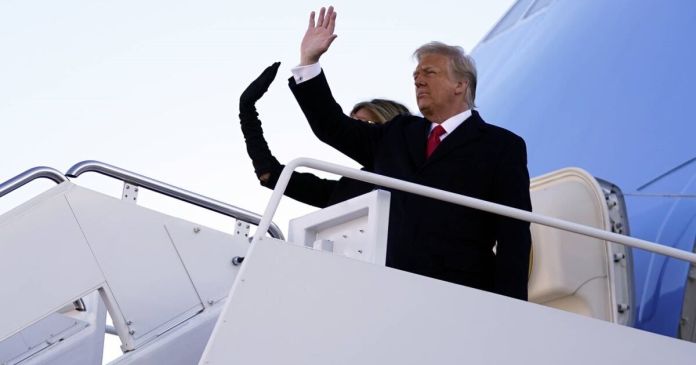 Many companies are turning their backs on Trump

Companies and banks that had remained loyal to the Trump brand over the past four years turned their backs on the Trump Organization after the violent assault on the Capitol on January 6th. Deutsche Bank, which still owes Trump around $ 400 million (€ 330 million), is reportedly one of them. She no longer wants to do business with Trump or his companies.
US credit institution Signature Bank closed all Trump personal accounts in response to the January 6th events, and the PGA of America Golfers Association has rejected plans to hold the 2022 golf championship on Trump’s New Jersey golf course.

The  Trump brand is damaged

The  brutal attack on the Capitol was a “game changer” for the Trump brand as well. “He is the most severely disgraced president in history,” added D’Antonio. Trump’s name has become synonymous with the “mob” that attacked the US Capitol.
Marketing professor Tim Calkins from Northwestern University also assumes that the Trump brand will suffer lasting damage because of the chaotic presidency of its namesake. “Before he took office, Trump stood for wealth, success and excessive luxury,” says Calkins. Now they arouse “associations with anti-government attitudes, racism and extremism” and are in a sense “poisoned”.

Trump’s assumption of office had already affected the lucrative value of his hotels in some places.

The  Republican is extremely unpopular in liberal New York. According to the Washington Post, occupancy in the Trump hotels in Washington and Chicago has recently been extremely low – also due to the corona pandemic.
Trump regularly rejects reports that he is in financial trouble. Regarding his debt to Deutsche Bank, he said in mid-October that the $ 400 million was only “a tiny percentage of my net worth.” Forbes magazine recently estimated his fortune at around $ 2.5 billion – up from $ 3.7 billion at the end of 2016 before he moved into the White House.

Noah Bookbinder, director of the non-governmental organization Citizens for Responsibility and Ethics in Washington (CREW), points out that over the past four years, tax money has reliably flowed directly into Trump’s hotels and golf courses – because Trump very often goes there with government personnel, family members and protection officers Secret Service stopped.
In September, CREW put the revenue from the President’s visits to Trump’s properties at more than $ 100 million.

The  organization listed a total of around 3,400 cases of conflicts of interest when foreign government delegations or lobbyists stayed in Trump hotels. Bookbinder criticizes that Trump did not completely break away from his corporate empire after he took office. Instead, there was a merger of political and business interests.

Is Trump building a TV network?

Trump used his presidency to advertise his brand – and his sons, who are responsible for the business, made a political mood for Trump.

The  consequence is that the Trump brand will have a harder time addressing customers who are not part of Trump’s political base. Trump could now rely on a “smaller, but extremely devoted” group of admirers.
In order to pay off his debts at Deutsche Bank, Trump could sell his real estate, says his biographer D’Antonio. Possibly there will be “no more Trump Towers, Trump Hotels or Trump golf courses in ten years”.
But the ex-president and former TV entertainer could reinvent himself, according to D’Antonio: Trump would possibly build his own TV network that would be anchored in the very conservative milieu. Trump would then continue to rally his following as a kind of “political evangelical” preacher.

Because of kidney damage: Former footballer receives compensation from the club

Bundestag – Berlin – Witness questioning in the Wirecard committee until...