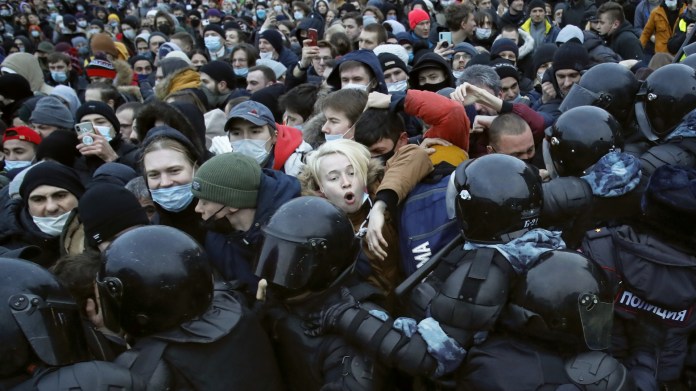 The  US and the EU have strongly condemned the actions of the Russian security forces against demonstrators.

The  US has sharply criticized the actions of the Russian security forces against demonstrators who yesterday called for the release of Kremlin critic Alexei Navalny during nationwide protests. “

Washington is calling on the Russian authorities to “release all those who have exercised their universal rights,” said the ministry spokesman. At the same time, the US government is demanding “the immediate and unconditional release” of Nawalny, he added. In addition, Russia must “fully cooperate” in the international investigation into the poison attack on Navalny and “credibly explain the use of a chemical weapon on its soil.”

The  EU also reacted to the actions of the Russian authorities against the demonstrators:

The  EU foreign affairs representative Josep Borrell criticized this sharply and said he regretted the numerous arrests, the disproportionate use of force and the restriction of internet and telephone connections. He is concerned and will discuss the EU’s next steps with the foreign ministers of the EU countries at a meeting in Brussels tomorrow.

As early as the middle of the week, representatives of member states described new EU sanctions for the imprisonment of Navalny as a realistic option. A decision will probably only be made if Navalny is to be held in custody for a longer period. At the meeting of foreign ministers in Brussels, there will only be an initial exchange of views on the subject.

Tens of thousands responded to the call to protest

In Russia, tens of thousands of people across the country responded to Navalny’s call to protest yesterday. Civil rights activists said more than 2,600 people were arrested at rallies in more than 90 cities.

The  demonstrators protested against Kremlin leader Vladimir Putin and demanded the release of Navalny.

Navalny was arrested in Moscow a week ago after his return from Germany. He had been treated in Berlin after a poison attack in August for which the opposition officials hold the Kremlin responsible. On Monday, a Russian court ruled that he was sentenced to 30 days in prison for violating suspended sentences.

Oliver Pocher: Jenke gets that much money for extreme experiment Inauguration live: Biden sworn in as US President – politics

Health – Take a break from exercising after Covid-19 – Health