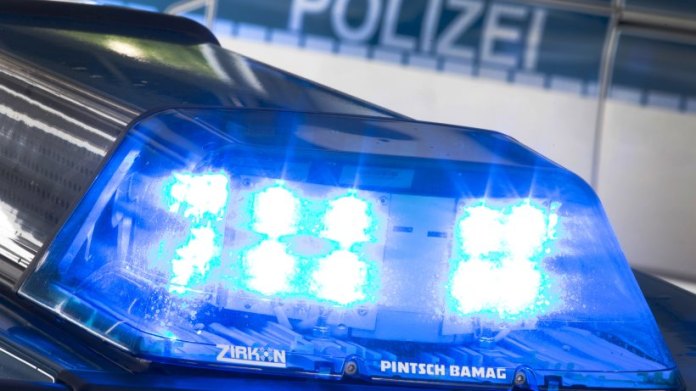 In our blog you will find the latest reports from the police and fire brigade in Berlin and Brandenburg from Monday, January 25th.

A wedding celebration for an extended family of Arab origin in Reinickendorf has been disbanded by the police for violating the Corona rules. On Sunday, a witness had noticed a steady coming and going from an apartment in a house on Hechelstrasse and notified the police.

When the emergency services entered the apartment around 6.45 p.m., they found more than 50 people in the rooms.

The  personal details of all those present, 21 women, 22 men and twelve children, were checked. Administrative offense proceedings were initiated against the adults for violating the Infection Protection Act, the police said on Monday.

One child fell while being checked and suffered a minor head injury that was being tended to by rescue workers. With the completion of the police measures around 8.45 p.m., 37 guests had to leave the apartment.

The y were sent off.

A BVG employee is in on Monday morning Tempelhof seriously injured in a robbery with a knife. According to the 36-year-old employee, he was walking in Attilastraße on his way to work in work uniform at around 3:30 a.m. when he was suddenly threatened with a knife by an unknown person and asked to hand over money. After he gave the man the money, he gave him a push in the right side of the body.

The n the man fled towards the Attilastrasse S-Bahn station.

The  BVG employee found a bleeding stab wound and notified rescue workers and the police.

The  injured man was taken to a hospital.

The re was no mortal danger. A robbery commissioner from Directorate 4 took over the further investigations.

An illegal weekend trip to the Baltic Sea coast brought a woman from Berlin several reports and an early departure accompanied by the police.

The  46-year-old woman was walking on the promenade in Warnemünde with a friend on Saturday when she suddenly pulled out her pepper spray and sprayed on three dogs, as a police spokesman said on Monday. At the same time, the woman sprayed the 55-year-old dog owner and her two-year-old grandson with the spray and insulted them.

By the time the police arrived, the visibly excited Berliner is said to have insulted other walkers. During the inspection, it emerged that the 46-year-old is said to have violated the Corona state ordinance with her entry. In addition, the suspicion of bodily harm and violation of the Animal Welfare Act is being investigated.

The  police accompanied the woman to the train station, where she was asked to leave. Your companion, who lived in the region, did not participate, it said.

After evading a police check on Sunday afternoon, a driver caused in Neukölln a traffic accident in which a senior citizen was seriously injured.

Shortly after 1 p.m., the crew of a civil patrol of the motorway police noticed an Audi A6 that was traveling too fast on the city motorway. When the two colleagues wanted to stop the car and check it, the car sped away.

The  Audi left the A 100 at the Oberlandstrasse junction and continued on Silbersteinstrasse. When the emergency services of a traffic control set up there gave him stop signals, they had to jump aside so as not to be caught by the vehicle, which can travel up to 100 km / h. At the Hermannstrasse intersection, the driver lost control of the car when turning and crashed into a traffic light mast that buckled. This in turn recorded an 81-year-old passerby.

The  elderly woman suffered a broken leg and several bruises and was admitted to a clinic for inpatient treatment, where she had to undergo an operation.

After the collision with the traffic light mast, the 25-year-old driver was arrested. He stated that he did not have a driver’s license, that he had taken drugs before driving and that the Audi was used without the knowledge of the owner. He had to undergo a blood test and identification service and was subsequently released from custody.

The  driver of the pursuing civil police was unable to brake in time and crashed into the escape vehicle, with the emergency vehicle being slightly damaged.

+++ wife injures father and brother with the knife +++

A woman was in on Sunday evening Gesundbrunnen arrested after previously stabbing her father and brother. At around 6 p.m. there were disputes between the 36-year-old and her 60-year-old father in an apartment on Grüntaler Straße.

The  woman stabbed her with a knife and injured her father’s liver and ribs. When the 19-year-old brother intervened, he too suffered a hand injury from the knife. Emergency services were able to overwhelm and arrest the attacker. She was introduced to a doctor who arranged for her to be admitted to the psychiatric department of a hospital.

The  father came to a clinic for inpatient treatment after an emergency operation. According to reports, there is no mortal danger.

The  brother received medical care from the ambulance service in the apartment.

At the intersection of Holzmarktstrasse / An der Michaealbrücke in Not a car crashed into a police vehicle late on Sunday evening. According to initial findings, an officer was said to have been slightly injured.

The  police van was traveling with special rights and rights of way around 11:45 p.m. when the impact occurred. Property damage occurred to both vehicles.

Last night two vans got in Neukölln burned. A witness noticed fire on the two vehicles parked in Elbestrasse at around 10:15 p.m. Police officers first put out the fire on the VW.

The  fire brigade fought the fire on the Renault, which burned out almost completely. No one was injured, the police said on Monday. A fire commissioner at the State Criminal Police Office has taken over the further investigations into deliberate arson.

At the weekend, two drivers in the districts of Elbe-Elster and Märkisch-Oderland were killed on Brandenburg’s roads. According to the police spokeswoman, there were also 43 injured.

The  Brandenburg police situation center counted a total of 282 accidents between Friday and Sunday. In 32 traffic accidents people were injured or killed, in the remaining 250 only property damage occurred.

On Saturday, a 42-year-old motorist in Finsterwalde (Elbe-Elster) hit a tree with his vehicle and died. He came off the road between Lindthal and Massen-Niederlausitz with his car and then collided with the tree.

PlayStation Store: PS5 and PS4 mega-sale started – Get it now

Spahn’s plan for the first vaccinations: “It’s about protecting the weakest”...

Impeachment trial against Trump begins in the second week of February

Corona expert as a toy: Drosten smoker becomes a hit