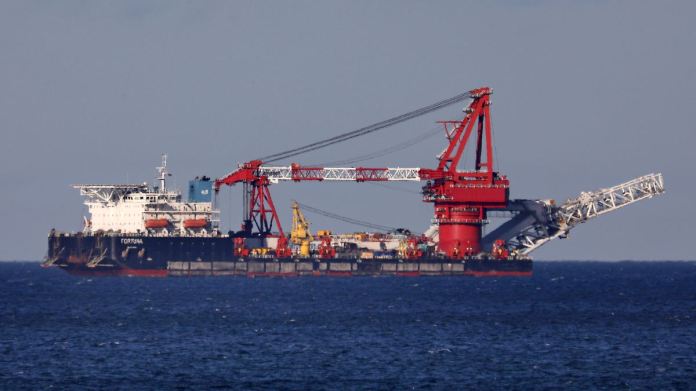 The  merger behind the controversial Nord Stream 2 pipeline project reports that work will continue. Shortly before, the Russian pipelayer ship “Fortuna” had been sighted in the Danish Baltic Sea.

The  conflict over the gas pipeline had broken out again in the past few days.

Notwithstanding new threats of sanctions from the USA, a Russian pipelayer ship has arrived in Danish waters to complete the controversial Nord Stream 2 gas pipeline. According to the Nord Stream 2 consortium, “Fortuna” has started work there. This will be done before the construction of the pipeline itself can be resumed. All work will take place within the framework of the permits.

The  consortium spoke of preparatory work and tests that would be done before the actual pipe-laying.

The  “Fortuna” was on Sunday around 15 nautical miles (around 28 kilometers) from the Danish island of Bornholm, as data from the location services Vesselfinder and Marine Traffic showed.

The re were therefore several Russian ships in the vicinity that are supposed to support the “Fortuna” with the work.

Nord Stream 2, which is largely financed by the Russian state-owned company Gazprom, is intended to significantly increase the potential for Russian gas deliveries to Germany.

The  nine billion euro project has long been controversial in the EU, and the US is also rejecting it.

The  federal government continues to support the project.

The  construction of the pipeline is almost complete and there is still work to be done in Danish waters.

Waited for Biden to take office

At the beginning of December, work on the 1,200-kilometer pipeline through the Baltic Sea in German waters was resumed after being interrupted for almost a year due to US sanctions. In Denmark’s waters, construction work has been permitted again since January 15th.

First, however, the assumption of office of the new US President Joe Biden was awaited last Wednesday. Shortly before, the government of Biden’s predecessor, Donald Trump, had informed the federal government that US sanctions would be imposed on the “Fortuna”.

Critics of the pipeline fear, among other things, a weakening of alternative pipelines and traditional transit countries, such as Ukraine.

The  arrest of the prominent Kremlin critic Alexej Navalny after his return to Russia caused additional criticism. In a resolution on Thursday, the EU Parliament called for construction on the German-Russian pipeline project to be halted.

Foundation as a protective shield for the pipeline

Mecklenburg-Western Pomerania, on the other hand, remains committed to the controversial pipeline. Critics should not use the current situation to stop the project, said Prime Minister Manuela Schwesig in the evening on ARD. “Because it is important that Germany remains in dialogue with Russia, especially in these difficult times,” said the SPD politician, also referring to the wave of arrests during mass protests of supporters of the imprisoned Kremlin critic Alexej Navalny in Russia.

In view of the US sanctions, the state of Mecklenburg-Western Pomerania had set up a “Foundation for Climate and Environmental Protection”. It should also become economically active as part of a “business operation” and buy material and machines for the pipeline project, which is made more difficult for companies by the sanctions. “Yes, it is possible to temporarily help Nord Stream,” Schwesig said on ARD.

The  foundation will neither build nor operate the pipeline: “But wherever American sanctions threaten German companies, we have to see where we can help.” At the same time, she contradicted the representation that environmental protection is of secondary importance to the foundation.

The  main purpose of using funds for the environment and climate protection is ultimately unlimited in time.

Not yet ordered: The federal government wants to test – but the tests are missing

B.1.1.7 spreads: mutants make up almost half of the cases

Markus Lanz: Timo Ulrichs with an alarming sentence about loosening

These shops are allowed to reopen on Monday

Corona summit today: will garden centers and flower shops be opened all over Germany?

Traffic controls in Stuttgart: At 81 kilometers per hour in the...

Samsung cell phone sunk in the aquarium: after 4 days something...