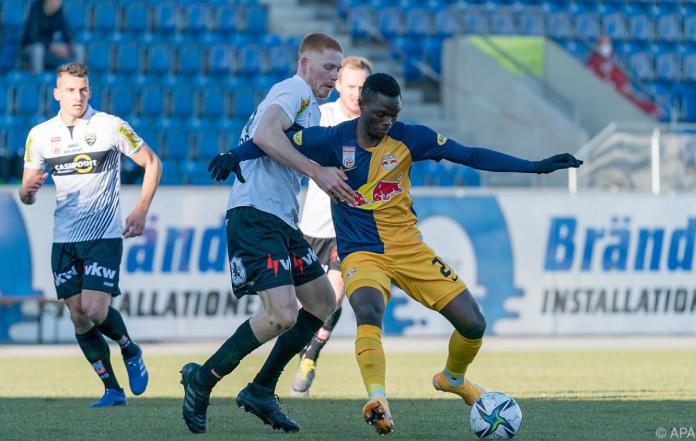 Red Bull Salzburg took back the top position in the Bundesliga with a very dry performance on Sunday.  The  defending champions presented themselves extremely pragmatically in the 2-0 win in Altach – there was no spectacle to see, but stability on the defensive, which meant that the “Bulls” ended a game without a goal for the first time after eleven competitive games.

Coach Jesse Marsch was clearly satisfied with the gate ban. “We practically didn’t allow any chance,” said the American after the duel with the penultimate in the Sky interview and spoke of a “very decent, very clean performance”.

Central defender Maximilian Wöber assessed the three points in the Ländle realistically. “You don’t have to be overly proud of it, but at least the press can leave us alone for a week because we didn’t get a goal,” said the Viennese and admitted: “It wasn’t the fireworks that we saw from many Salzburg – Knowing how to play, but a very solid start. ”

Especially before the break, there was little to nothing to be seen of the attacking power. “At the beginning we didn’t have enough power,” said Marsch. “

The  first half wasn’t easy, the pitch was very deep and the opponents were also deep.”

The  lead through an own goal by Zwischenbrugger at the beginning of the second half made the task easier. “That meant the opponent had to play more aggressively and we had more space,” said the coach.

For Altach, on the other hand, hopes of a point win ended with the first goal. After all, according to the bad luck raven Zwischenbrugger, the big favorites could be challenged at least in phases. “We did very well in the first half, then it was difficult to make it 0-1.

The  defeat was deserved, but our performance before the break was good,” said the central defender.

His club is only in penultimate place thanks to the goal difference that is three goals better than Admira, the next task is the guest appearance with the surprise team WSG Tirol on Wednesday. Also on Wednesday, Salzburg will host SV Ried. After the military coup: the situation in Myanmar is coming to a head

Telekom Austria can grow in the corona year

LGBTQ Tiktoker attacked in Zurich: “He provoked us first, only then did I hit him”

Leaving Tyrol from Friday only after corona test – test obligation

Covid-19: “Tirol tests” as an organizational challenge for municipalities

Transported away with a stretcher: Neymar injured in the ankle –...

Riccardo Simonetti had his first relationship at the age of 27 Rift Apart is the showcase title for PS5 gamers

Covid-19 mutation: The Netherlands prohibits passenger flights from the UK