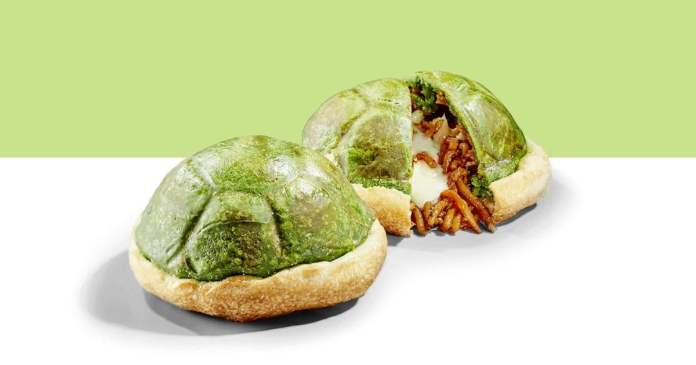 Super Nintendo World should have opened on February 4th. Due to the Corona crisis, the opening of the amusement park in Japan has been postponed indefinitely.

At least virtually you can get your taste buds – in the truest sense of the word. Nintendo has revealed which snacks are waiting for visitors to the theme park.

Typically for Japan, the dishes are designed and named to match the theme. For example, the “Mario Cafe” has ice cream shakes and pancake sandwiches that look like Mario and Luigi’s hats.

It gets a bit bizarre at “Yoshi’s Snack Island”. Here you can get a green turtle shell. In view of the protection of species and the fact that turtles are still eaten as a specialty in some countries, this dish is perhaps a bit unfortunate.

Inside this “Kora’s Calzone” are yakisoba noodles and cheese.

The  idea is that due to the shape, this dish can be consumed on the go: pasta with cheese on-the-go. As a suitable drink there is “Yoshi’s Lassi” in several flavors.

In Toad’s Cafe you will find dishes for the bigger hunger. As a starter there is something like “super mushroom pizza soup” with pastries as a mushroom hat.

The  burger with bacon and mushrooms is recommended as the main course.

The  vegetarian alternative is caprese salad in the style of the piranha plant. As a sweet finish there is tiramisu, packaged as a question mark block.

Combination of women on TV, live stream and live ticker

Darknet: This is what the black market for Covid-19 vaccines looks...

Cherokee request removal of their name from Jeep SUVs

Austria’s men on Saturday without a European Championship medal

Ex-BVB coach takes over Mainz – but probably only for one...

Coronavirus – number of new infections below 3,000 for the first...