The  short winter break with mild temperatures in Berlin and Brandenburg is over: This week it should only be a maximum of four degrees in the region – rain and snow included.

The  Monday begins, according to the German Weather Service (DWD), with smooth roads in places due to freezing wetness, some snow and in some places light frost.

The  maximum values ​​are between one and three degrees.

The  weather experts expect snow or sleet with slippery again at times.

The  maximum values ​​increase to zero to two degrees.

The  meteorologists expect a lot of clouds as well as some rain or sleet from the southwest.

The  temperatures are expected to reach values ​​between two and four degrees.

The  DWD announces a similar weather situation for the Thursday on: a maximum of two to four degrees, initially a little cloudy, later in the afternoon rain or sleet.

“You just wish they could do it” – fernsehserien.de 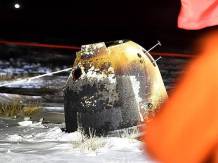 China celebrates the return of its “Chang`e 5” probe

HUAWEI study: How important is protection in the digital world?