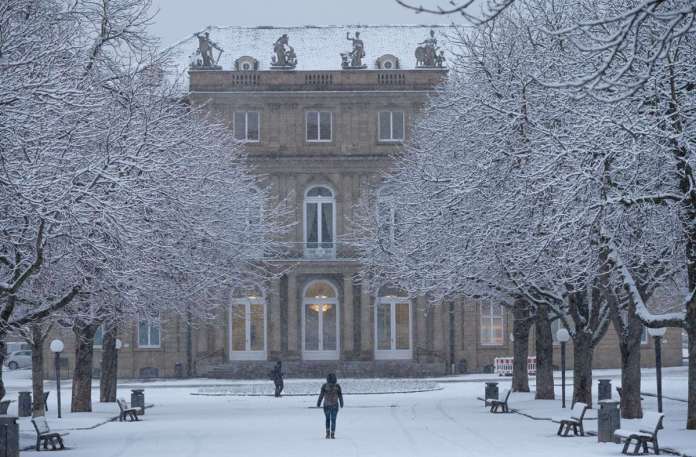 New castle, lake of fire, burial chapel – users have published photos of their city covered in snow on Instagram. We have collected some pictures of the recent onset of winter in the state capital.

The re is snow again in the state capital: On Monday night, a few centimeters of fresh snow fell in Stuttgart and the snowfall does not abate in the morning either.

The  onset of winter has caused several accidents in Stuttgart and the region. Regardless of this, many Stuttgarters apparently like the return of the white splendor visually – they express their joy on the Instagram social network.

In Eberhardstrasse in downtown Stuttgart, the combination of snow-covered trees, dawn and street lighting created a special atmosphere.

For one user, Stuttgart is now like a “winter wonderland”.

It’s also white in the south of Stuttgart.

The  new onset of winter looks good in the Johanneskirche and the Stuttgart Feuersee.

The re is snow on the roof of the New Palace as well as on the palace square in front of it.

At the Pfaffensee, which like the Bärensee and the Neue See belongs to the Stuttgart park lakes, it was wintry on the weekend. “So far I was convinced that I like Stuttgart especially in summer. Now at the latest I know that it’s always nice here, ”writes the author of the recording.

The  burial chapel on the Württemberg in the Rotenberg district of Stuttgart is always a popular photo spot on winter days.

The re is still time for professional and amateur photographers to take more photos:

The  German Weather Service (DWD) expects a lot of clouds in Baden-Württemberg on Tuesday too, and some snow is expected to fall, especially in the north and east of the country. In the extreme south, the weather experts also expect sunny sections.

The  maximum values ​​are then between minus three and five degrees.

Trial of feminicide 25 years ago: the American murder witness wants...

BMW Board Member for Development: “Race for range makes no sense”

First vaccinations in Saxony: A “glimmer of hope” in the pandemic