The  1991 Gulf War almost led to the cancellation of the Hahnenkamm Races 30 years ago – not because of imminent danger, but out of moral concerns about holding such mass spectacles in times of war.

The  Swiss Franz Heinzer, who shortly after grabbed downhill gold at the Ski World Championships in Saalbach, which was also on the brink, will probably still be grateful today that the Federal Government at the time made Kitzbühel possible despite all opposition, after all Heinzer raced to his first Streif victory . And this year too – unless the unexpected suddenly emerges – the Hahnenkamm races will take place. Despite Corona. What Kitzbühel’s OK and Skiclub President Michael Huber still considered utopian at the first lockdown in March 2020, namely slamming down the Streif in a pandemic, will become reality with the first training on Wednesday. Especially now because of Corona. Because the show has to go on – and like the Superbowl, Kitzbühel is “the greatest show on Earth” for all ski fans.

What else is happening?

The  adversity in the run-up to the 81st Hahnenkamm Races was enormous (and it will probably not have been the last): First of all, at the beginning of the year, the public along the route (which also applies to day skiers) was finally taken over

The  Lauberhorn race was an unexpected and historically unique gift that vanished into thin air within hours due to the seemingly dangerous virus mutation. Instead of holding five races in nine days, the slalom classics from the Ganslernhang had to be completely deleted and given to Flachau; at the same time, if the British mutation spread more widely, there was a risk of total cancellation and thus a veritable and uninsured fiasco for the Gamsstadt.

Due to the relatively stable figures – in the entire Kitzbühel district only 157 people were considered infected on Tuesday – the organizers are now allowed to focus on sporting matters again. But without FIS race director Markus Waldner, who apparently got infected in Flachau and now has to pass for the most important World Cup races; Hannes Trinkl, 2001 world champion but without a Streif win, will replace him.

It will be the focus of attention when the world’s most dangerous descent is scanned for the first time – especially this year. Because the Streif will also be an endurance test insofar as the athletes last raced in Bormio back in the old year and Kitzbühel will now even be the only outing for downhill pilots in January. On the one hand, defending champion Matthias Mayer and Co. come rested on the Streif, on the other hand, due to the lack of Lauberhorn, there is a little lack of racing experience in their legs. No problem, says ÖSV men’s racing director Andreas Puelacher: “

The y are racing drivers who have trained all summer and want to show what they can do in winter and bring their performance. I believe that they all have that under control.”

At the same time, Kitzbühel is completely different this year – no hype, no sponsor appointments, no VIP handshakes. But even without bathing in the crowd at the start number draw and award ceremony. But you are fully challenged with the double descent and Super G: “Down here three times is definitely tough, it’s a long week, but these are the only speed races in January. For them it simply means to be fit and to be there “, says Mayer. Vincent Kriechmayr, second in the previous year and Lauberhorn winner in 2019, complains about the failure of the classic in Switzerland, “but three times Kitzbühel is not a bad substitute”.(may)

Real estate prices rose 6 percent in 2020 despite the pandemic...

Corona in the Landsberg district: Incidence below 60 – number of... 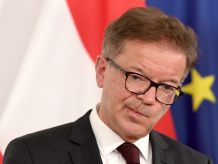 Anchober says what still has to happen in the lockdown –...

At least seven fatalities in earthquake in Croatia