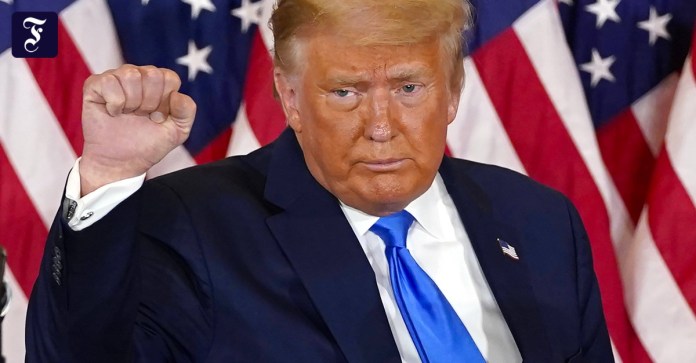 WA lot of the history books about Donald Trump will likely say that he inflicted deep internal wounds on the United States, especially in the final weeks of his tenure. When he took his oath four years ago, however, there was widespread concern that the half-revolutionary, half-restorative claim with which this politically inexperienced businessman had made it into the White House would turn the entire world upside down.

“Make America great again” was primarily a challenge to other nations. In Trump’s simple worldview, they are constantly exploiting America, and it doesn’t even matter whether they are allies or adversaries.

World politics has proven to be more resilient than American domestic politics. Trump has pulled out almost all the stops on the world stage to achieve his goals, including threats and punitive measures. And yet the world doesn’t look so diplomatically different today than it did on January 20, 2017.  The  United Nations still exist, as does the World Trade Organization, NATO and America’s bilateral defense agreements in Asia.

Not much has changed in Europe

In Europe in particular, a lot has remained as it was. Trump’s opaque and unstrategic attempt to find a new understanding with Russia came to nothing; NATO maintained its presence on the eastern flank. Trump caused (too) much uncertainty in the Alliance, but at least he made the Europeans spend more on defense. This is ultimately in our own interest.

Trump has achieved the least with China, although he left no stone unturned to hinder and slow down its rise. At the end of his term in office, the People’s Republic was, what an irony in history, the only major economy that still had growth in the Corona year 2020.

It was precisely in dealing with this strategic rival that the deficits of Trump’s bilateral method became apparent. With his tariff wars, he scored one point or another, but Beijing got the big hit.

The  leadership vacuum that Trump left in Asia filled China with its own regional trade deal. In the long run, this will also have consequences for security policy.

Biden has to make people forget their doubts

Such loss of terrain was inevitable, because Trump was even more resolute than his predecessor Obama in dismantling the overstretched world power. He was the first president since Jimmy Carter not to wage a new war. In the Middle East and North Africa in particular, this opened up scope for ambitious powers such as Russia and Turkey, which had no qualms about engaging in military action; Iran just sat out Trump’s sanctions.

Only the new relations that Israel was able to establish under American mediation with some Arab states are an important success that will outlast this chaotic administration.

Biden inherits an outside world from Trump, which in many places should seem more familiar to him than his troubled homeland. He can quickly eliminate some of the major blunders of his predecessor, such as the termination of the Paris climate agreement.

The  serious doubts that Trump sowed about America’s reliability will be tried to be forgotten for the time being, especially in Europe.

The  American age was the 20th century, we are already living in a different time.

After the Corona outbreak in Mitte: Nursing shared apartment did not...

Lewis Hamilton: suffering from market value because of Russell? /...