Anton Bernard & Co. were rarely left behind – like here with the Bully. © Vanna Antonello

For years, Bolzano has had the reputation of being a defensive bulwark that is impressive not through aesthetics, but through efficiency. That this is not (always) the case was shown by the men from Greg Ireland on Sunday evening when they practically showed off the Slovaks with beautiful actions and defeated them 6-0 after 60 one-sided minutes.

The  HCB was able to develop on Sunday due to two facts: On the one hand, because head coach Greg Ireland could fall back on all his strikers and they stood out with a great joke. On the other hand, because Bratislava gave the foxes a lot of space, especially in the high slot, and drove into counter attacks several times, which the home team played well to the end.

In the first third, the team trained by Peter Draisaitl was able to prevent these actions as far as possible, although they were only rarely able to free themselves from the clutches of the South Tyroleans. Great opportunities were still in short supply – it was 0-0 after 20 minutes.

While the Foxes had taken over gentle gear in the first section, this changed in the middle third. Favored by a punishment from Bratislava, they took the well-deserved opening goal.

The  puck came to the omnipresent Brett Findlay via Denis Robertson, who played a perfect cross pass to Anthony Bardaro and saw the latter hammer the hard rubber straight into the opponent’s case (23rd). Only two minutes later, Capitals goalie Coreau had to reach behind him again when Bolzano recently showed its quality. A wonderful 3-on-2 situation over Bardaro, the conspicuous Mike Halmo and goalscorer Dan Catenacci froze the opposing defensive line. This was now completely beside her. 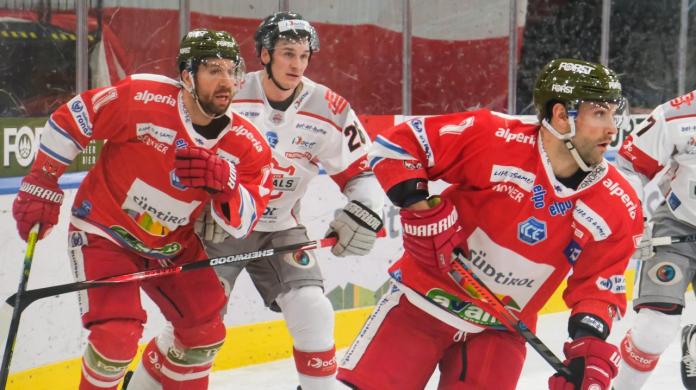 Stefano Giliati and Dan Catenacci had an easy time of it. © Vanna Antonello

After all, Bratislava was now moving forward, but there was no getting past Leland Irving. Instead, Findlay made everything clear – again in power play. In the 47th minute, Bozen’s top scorer took advantage of the passive and careless boxing of Bratislava to make it 4-0 on a nice pass from Bardaro. If at that point there were still doubts about the HCB’s victory, then they were finally gone. Also because Ivan Deluca single-handedly drove the result further up. But that’s not all: In his 400th game for the HCB, Daniel Frank also hit the mark – and thus fixed the 6-0 final result.

After the HCB, KAC and Fehervar have also been in the ICE playoff since Sunday.

The  Klagenfurters defeated the bottom of the league from Linz 3-2 and replaced the Hungarians who were not playing in second place. Thanks to the help of the VSV, who defeated the sixth placed Dornbirn Bulldogs 5-3, the duo is early in the pick round of the five best teams and thus in the quarter-finals.

Voting Rights in the US: How Stacey Abrams Made History Agriculture – Stuttgart – salmon back in the southwest – economy