The  Bundesliga started the second half of the season with a few surprises. Especially the 3-2 home win of the relegation candidate 1. FSV Mainz 05 against the top team RB Leipzig came unexpectedly. Frankfurt coach Adi Hütter was completely satisfied after his Eintracht 5-1 away win at Arminia Bielefeld.

The  “Sky” votes for the matchday:

Christian Gross (coach FC Schalke 04): “We have to acknowledge that they deserved to win.

The  first two goals gave Munich the assurance that they would win. We should never have got the second goal. I mentioned that during the break that we had to do everything so that they don’t score a second goal, because then it will of course be difficult against Bayern. […] We did some things very well, but some very badly, of course.

The  game showed progress, we were pretty good, but not good enough. “

Hansi Flick (coach FC Bayern Munich): “I didn’t like everything in the game that I saw. We were in the game, but we made too many mistakes. Our ball losses are sometimes too easy, we sometimes play with too high a risk. In the end, we have we prevailed and are very satisfied with the match day. Nevertheless, it is of course important that we analyze things and do better again in the next game. ”

… to the game: “In the first half we partly besieged the goal and had a couple of chances that were played really well. But we also had a few negligence in our game, Schalke had a great chance at the beginning. But overall you could tell that if we pick up the pace and concentrate on our game, we will always put ourselves in good positions. ”

… on constancy and championship: “At the moment it’s not like we’re completely rolling over the opponents. It wasn’t like that against Schalke either.

The  media then always try to analyze what’s going on at Bayern, based on the motto: ‘Why aren’t they like that anymore dominant like last summer? “But you mustn’t forget: last summer was extraordinary. It quickly happens that you take that as a benchmark. And of course we want to go there again. On the other hand, every opposing team also defends itself Last week we still got nine points from three games and made a huge step in the table. And in the end that is what counts. ”

… to the game: “We couldn’t play that much today because of the pitch. We played well in the first half, but didn’t take our chances. We could have scored one or two goals earlier, but Ralf Fährmann also held some balls very well. ”

The re were good accents from Schalke.

The y had two really good chances in the first half, in which we also didn’t defend well. Schalke just lacked a real sense of achievement at the moment, so that you experience a rebellion within the team Of course, I wish the Schalke players that they stay in the league and can still turn the tide. I’ll keep my fingers crossed for them. ”

… on the question of whether Schalke played a good game: “I think it’s not really credible when you’ve conceded four goals. We deserved two, the other two were too much. Bayern were better today and deserved to win. Nevertheless, we could have rewarded ourselves.

The y’ll come for us important games in the coming weeks, starting with Werder Bremen on the next matchday. ”

The re are still 16 games to come. We have now played against the strongest and from now on there are games in which we have to score points. I can assure every fan that I will do everything I can to get us back on the road to success.”

Sebastian Hoeneß (coach TSG Hoffenheim): “We had a great evening because we worked very hard.

The  basis was the work against the ball, plus the effectiveness. Congratulations to Andrej Kramaric for the record.”

Markus Gisdol (coach 1.FC Cologne): “How we got the goals is far too easy. And then you can play as you want, then you won’t take any points. We made the biggest mistakes today in defending standards and counterattacking. We have to go again Show the consistency that we recently showed and do not allow ourselves to be deprived of our wages because of standards. If we are not awake then the opponent will punish it mercilessly. We will now analyze it and try to correct these mistakes. ”

Marius Wolf (1. FC Cologne): “We defended too stupidly. Hoffenheim scored three goals that they didn’t know how. We actually played a good game. That sounds strange with this result, but we had a lot of chances and we just weren’t rewarded When we get goals like that, it’s just hard to win a game like this. We have to fix these mistakes as soon as possible. ”

Dominick Drexler (1. FC Köln): “We gave away two penalties today and defended the standards very poorly. We actually had a decent plan in the first half as to how we wanted to approach Hoffenheim. But then we get counterattacks that we don’t defend well. But they are not individual players, we have to follow the plan that we set out before the game much more consistently. ”

Oliver Baumann (TSG 1899 Hoffenheim): “We are on a good path. In the first half of the season it was up and down and of course difficult with the many failures. We already had a couple of construction sites that we have now gotten to grips with. Training helps us, we hardly had any training in the entire first half of the season and this team just needed it. You can see that now. We are working very hard and it’s nice that it is finally bearing fruit. We may have misjudged it in the first half of the season. We probably did already thought that we are so good that we can attack again at the top. And we have not made this mistake in the last few weeks, just looked at ourselves and worked to improve. ”

… on his scoring record (most successful Croat in the Bundesliga): “I’ll definitely be on the phone with Ivica Olic in the coming days. But first I have to thank my team-mates and the club for being able to do it. I never dreamed that I could do it. With Mario Mandzukic and Olic played such great Croatian players in the Bundesliga and so I’m very happy. ”

Bruno Labbadia (coach Hertha BSC): “It’s like we concede goals that are too easy and miss too many chances. Sure, it’s a huge disappointment. Bremen did very well because they were very close.”

Florian Kohfeldt (coach Werder Bremen): “We took advantage of the things Hertha offered us and we defended well. That was crucial today. It is incredibly good how some players have developed.”

Bo Svensson (Trainer FSV Mainz 05): “We did a very good fight as a team. We are really happy, but I am also happy that the group has finally rewarded itself for the great effort. I am very satisfied with the mentality. In terms of content, we must and can clearly improve in all aspects of the game. It’s a difficult position, but the path is clear. ”

The  sharpness and aggressiveness at Mainz was greater. That was not a super graphic game, but with three points for Mainz, which are not undeserved. Basically, we don’t have to talk about Bayern if we lose the games. It’s about ourselves to win the games. ”

The  team didn’t give up, but at no time did we have the compactness like in the last games.”

The  three quick goals and the fact that we scored the fourth goal straight after we scored 3-1 were decisive. We found great solutions through play. It was an all-round successful afternoon, both offensively and defensively. ”

Peter Bosz (coach Bayer Leverkusen): “In the end Wolfsburg rightly won. We started very well and had several great chances. You have to do them against such a team. In the end, we no longer had the strength and the freshness at the end.”

Oliver Glasner (coach VfL Wolfsburg: “I like coming to the BayArena. I’m here for the second time and I’m allowed to go home as the winner for the second time. We got in very poorly. After that we kept up the pace and got better and better in the game.

The  goal was great . Leverkusen was on the trigger in the second half, but we didn’t allow a chance. A big compliment to the guys for their tactical discipline. I’m really proud. ”

Christian Streich (coach SC Freiburg): “It was a happy victory in the end. VfB played very well in the second half and of course deserved a draw.”

Pellegrino Matarazzo (VfB Stuttgart): “We got into the game properly. With the goal we lost the thread.

The  gap at the break was okay despite the missed penalty. We were very dominant in the second half and had some chances.”

Heiko Herrlich (coach FC Augsburg): “We are very happy about the victory. It was an absolute will. We had luck on our side a few times. We have now scored six points against Union, I am very satisfied. With Florian Niederlechner we have always seen him works for the team. For me, it was just a matter of time before the knot burst. So it’s all the better that it turned out like this today. ”

Urs Fischer (Union Berlin trainer): “It was a happy win for FCA over 90 minutes. We were very present and had the game under control. Out of nowhere we were behind.

The  team then showed morale. After the change, Augsburg was very handy. You are down again back. And then everything comes together, we miss another penalty. We have invested a lot, but haven’t found the solutions to at least equalize. ”

Marco Rose (coach Borussia Mönchengladbach): “It was a very good game with open sights for both teams.

The re was a lot of intensity. It was important to make it 2-2 before the break. It was a great performance by the team. It was a good end to an intense week.”

Edin Terzic (coach Borussia Dortmund): “For a long time it was a match at eye level in which we had to deal with a lot of setbacks. We had to put a lot of effort into a goal, a lot more than our opponents. We are bitterly disappointed that we won with such simple and stupid goals Have fallen behind. “

Berlin is sticking to easing – Corona tests for shopping –...

Baukindergeld paid out to more than 7000 families in MV 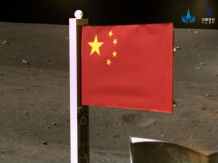 China hoists its flag on the moon

Is Bayern facing a deal with left-back?

Thanks to light artist Hofstetter: astronaut landed on the north face...

Alarming use of painkillers in German football