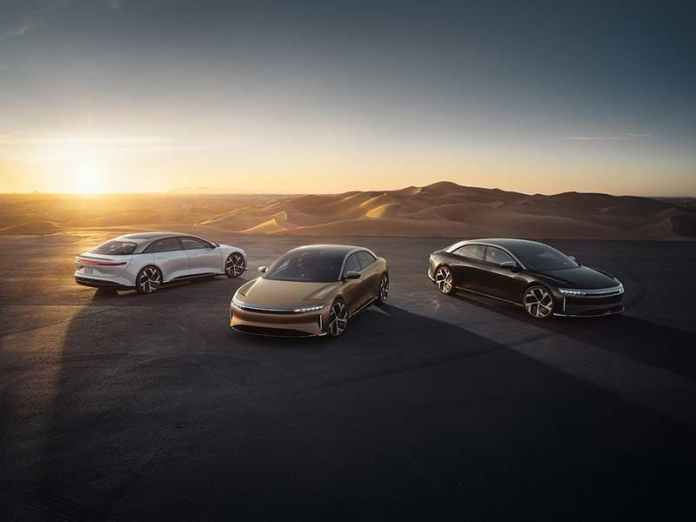 The  factory is ready, the first Lucid Air should roll off the assembly line in the spring, and now the IPO of Tesla rival Lucid Motors is also making progress. Up to $ 15 billion is in there.

In December, Lucid Motors announced that after a year of construction, the first phase of building the e-car plant had been completed. In the meantime, the “Lucid AMP-1 Factory” in Casa Grande in the US state of Arizona should be almost finished. After all, the first Lucid Air should roll off the production line in spring. It starts with the most expensive version of the luxury electric vehicle, which is said to cost $ 169,000. According to Lucid, the electric car will be coming to Europe this year. And the IPO could also take place in 2021.

The  Saudi state fund Public Investment Fund (PIF), through which around one billion dollars flowed into the Tesla rival in 2018, is also involved.

The  sovereign wealth fund holds the majority in Lucid Motors. Now the financial commitment should apparently pay off – as before with Uber. According to the business news agency Bloomberg, Lucid Motors is currently in negotiations with the investment firm Churchill Capital about an early IPO. Churchill Capital, in turn, also has ties to the Saudi sovereign wealth fund.

According to the Handelsblatt, Lucid’s IPO would then take place via a shell company (Spac) founded by Churchill Capital specifically for the IPO of another company and launched on the stock exchange.

The  Spac has raised more than two billion dollars in its own walk on the trading floor. Churchill Capital Corp IV’s share price nearly doubled after the negotiations with Lucid became known. Lucid could be valued at up to $ 15 billion in an IPO, according to Bloomberg. For comparison: Tesla is already worth over 800 billion dollars after rapid price growth in the past few months.

Nevertheless, Tesla boss Elon Musk seems to be looking closely at what is going on at Lucid Motors. No wonder, there are some ex-employees, some of them high-ranking, on board.

The se include the former head of production at Tesla, Lucid Vice President Peter Hochholdinger, and Lucid CEO Peter Rawlinson, former chief engineer at Tesla. Shortly before the launch of the Lucid Air, Musk posted on Twitter: “Rawlinson did not design the Model S.

The  prototype was ready before it came and it let us down when things got tough, which wasn’t cool of him. ”

The  person addressed responded with a sober“ man who hates us ”and pointed out that his name was on the patents.

No wonder Tesla and Musk are getting a little nervous with the upcoming Lucid Air launch. After all, the upcoming luxury electric vehicle should have a range of up to 830 kilometers and thus overshadow most of the Tesla fleet. It is also no coincidence that Musk presented a Tesla with a range of 837 kilometers at Battery Day, which was specially postponed due to the Lucid concept. And: Musk had reduced the price of the Model S shortly after the price for the base model Lucid Air Pure was published so that the Tesla would be just under cheaper.

Edeka, Rewe, Real: call back! THESE snacks can cause poisoning

Duchess Meghan: She won’t like that at all: Father Thomas wants...

The “Cradle of Humanity” expansion and update 4.00 will be released...

Another deportation flight from Germany landed in Kabul – dead in...

Serge Gnabry or Kingsley Coman for Liverpool? That’s what Didi...