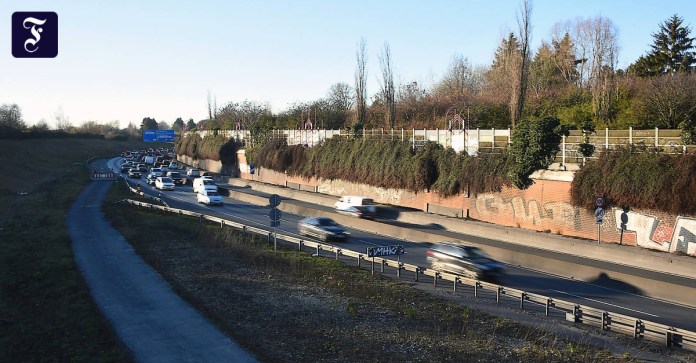 Dhe traffic rushes under the Seckbacher Landstrasse in Frankfurt, which acts as a bridge over the A661. A line of cars that won’t tear down. It is hard to believe that this motorway should be built over under full load, so to speak.  The  traffic should continue to roll when a cover is placed over the approximately 1100 meter long section between Friedberger and Seckbacher Landstrasse.

The  project is not as easy as it sounds.

The  planning costs for the project alone are 9.4 million euros.

The  manufacturing costs cannot yet be precisely quantified; they are estimated at around 258 million euros. A sum that the city has to raise largely on its own. So far, the federal government has only announced that it will participate in the amount of the costs for noise barriers that will no longer be incurred. However, the federal government does not want to assume the construction costs because the project does not have a priority in the federal transport infrastructure plan.

Can the city really afford the development when a lot of income is falling due to the corona and other expensive projects such as the construction of the new stages are pending? Planning department head Mike Josef (SPD) nevertheless considers the enclosure of the A661 to be a “huge opportunity for urban development”.

The  project is called for in terms of urban development, because it connects the districts of Bornheim and Seckbach with one another and has a high “added value” for the quality of life in the adjacent districts.

By capping an “urban planning sin”, i.e. the city motorway, an 80-hectare green belt would be created from Günthersburgpark via the water park to Lohrberg – and the possibility of building around 5000 apartments there. However, this added value would decrease if fewer apartments were built, for example if the adjacent model district of Günthersburghöfe in the Nordend fails.

The  Greens had recently questioned this project.

As early as the end of 2019, the city and state signed an administrative agreement to implement the enclosure together. At that time, Josef and his employees pushed the pace so that the construction of the housing and the planned widening of the motorway could be interlinked on six lanes – two in each direction of travel plus a so-called interlacing strip.

The  expansion of the A661 in this section is related to the commissioning of the Riederwald tunnel, which is planned for the end of the twenties. By then, says Josef, the enclosure could also be ready. However, there are two separate planning approval procedures – for the enclosure and for the expansion. Both projects can only be combined if the city council decides on the enclosure in 2024. What is already beginning, however, are the preparatory investigations – i.e. the measurement of the route and the determination of the traffic volume.

The n the engineers should begin detailed planning in the summer.

The  city’s partner, which bears the planning costs, is Deges, the Deutsche Einheit Fernstraßenplanungs- und Bau GmbH, which is responsible for the design planning and costing for the lid on behalf of the state. On the basis of this planning, the oath should then come in 2024. As Deges project manager Jens Kutzke explains, traffic on the A661 can be maintained during the construction of the enclosure.

Fellbach: Unknown stabbed the 24-year-old in the back with a knife

Did the Weimar crime scene die with Lessing? | ...

Renault drove a record loss of eight billion euros in 2020 This limits the range of motion in hotspots