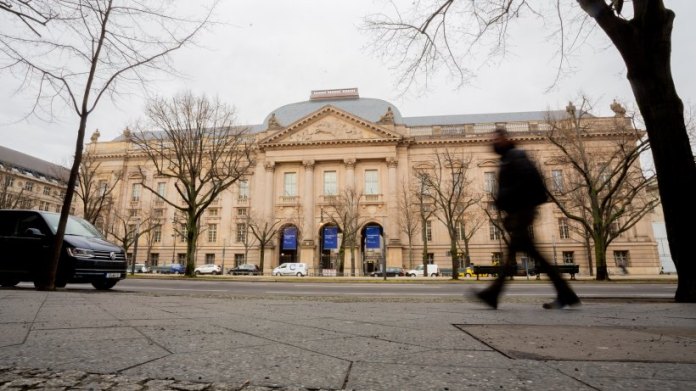 Under the linden trees

The  Berlin State Library spruced up after the renovation. Many a discovery awaits between the seemingly endless bookshelves.

Berlin. It’s always just before half past ten here.

The  gold-colored hands of the huge reading room clock are at 10:25 p.m. Around that time the bomb hit the Prussian State Library, on February 15, 1944, the year of the war. In the meantime, the clock can be found somewhat hidden behind an open staircase in the open-access magazine.

The  hands are no longer dented.

The y have been renovated, as has the entire gigantic structure around them. After 16 years of renovation and 470 million euros in construction, the Berlin State Library will open its Unter den Linden location on Monday with a new look.

The  620 workstations in the seven reading rooms still have to remain empty. Due to the corona, the newly designed library can only be explored digitally for the time being; limited lending operations are planned again from February onwards. General director Barbara Schneider-Kempf is still standing alone on the sweeping stairs in the renovated foyer.

The  new barrel vault by star architect Hans-Günter (HG) Merz, on which the overall concept of the work is based, extends over the library manager.

The  staircase is part of the historical axis through the building complex with entrance hall and fountain courtyard, which users can now use to reach the large reading room, which opened in 2012.

Schneider-Kempf: “We are a large co-working space”

The  special reading rooms have now also been redesigned and refurbished: on the walls, dark wooden shelves enclose the books, in between there are the linearly designed work areas, whose linoleum surfaces incorporated into the tables pick up the bright orange of the carpet. “We now have great rooms in addition to our great collections,” says Schneider-Kempf. “We are a large co-working space.”

A globe protrudes head-high in one of these impressive halls between the workplaces.

The  motifs based on “Alice in Wonderland” refer to the topic of this area: Here, the approximately 200,000 volumes of the collection of children’s and young people’s books, which go back to the 17th century, can be studied. “

The re are two collections in the State Library that were created either only in the West or only in the East,” explains Schneider-Kempf.

The  East Europe collection goes back to the Stabi West.

The  United State Library owes its children’s and young people’s books to the East.

In the music reading room, the general director leafed through the facsimile of the imposing score of Beethoven’s Ninth Symphony, a copy of which she always had at hand in her representative office – in keeping with the old building. Beethoven’s original is in the vault of the State Library, along with other manuscripts such as Mozart’s “Magic Flute” and other great operas or 80 percent of Bach’s manuscripts, including the Passions.

The se are just some of the treasures among the approximately 25 million media and objects.

The  State Library, founded in 1661, is one of the most important libraries in the world and the largest academic universal library in German-speaking countries. Also because of this importance for the users, the Stabi has been renovated to a large extent alongside ongoing operations since 2005. That didn’t make the work easier – and made it much more expensive.

The  renovation of the huge complex with a good 100,000 square meters of floor space on Unter den Linden boulevard was originally supposed to be completed in 2012 and then in 2016. For the costs there were once 326 million euros in the documents, now it was 470 million.

For future work, Schneider-Kempf would like “considerably more autonomy” for the State Library. So far the house is under the umbrella of the Prussian Cultural Heritage Foundation. In an analysis, the Science Council rated the work of the State Library very positively and promoted the institution’s “professional independence”.

Library museum is to be built in 2021

Beyond such structural policy, there are other powerful projects to come. A planned library museum is to be built this year. And then there is the second house on Potsdamer Platz in addition to the Unter den Linden location.

The  40 year old building by Hans Scharoun is an outstanding example of modern architecture.

The re, too, extensive renovations have to be carried out, which will take years again. It is not yet clear how many.

The  costs – and their possible increase – are also still unknown.

For 2 days only: Media Markt and Saturn are launching new...

That is why there are no races in Wengen

Love chaos at Italo-Kicker: Ex gets child from him

Over 2,500 fines for data protection violations in Austria