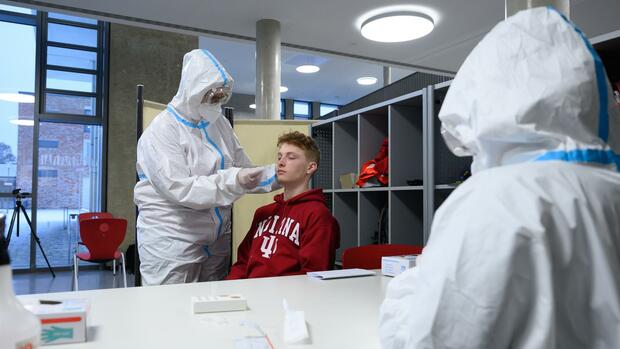 The  number of new infections in Germany is falling.

The  German health authorities reported 6,729 new corona infections to the Robert Koch Institute (RKI) within one day. In addition, 217 new deaths were recorded within 24 hours, as the RKI announced on Monday morning. Last Monday, the RKI recorded 7,141 new infections and 214 new deaths within 24 hours. However, the data from Rhineland-Palatinate were only incompletely transmitted at this time.

The  number of new infections reported within seven days per 100,000 inhabitants (seven-day incidence) was 111.2 on Monday morning, according to the RKI. Its previous high was reached on December 22nd at 197.6.

The  Robert Koch Institute continuously records the current Covid-19 situation. It evaluates all information on the basis of current surveys and assesses the risk for the population in Germany.

The  health authorities receive figures on new infections, recoveries or deaths from all over Germany and transmit them to the RKI.

Covid-19 cases that meet the RKI case definition must be electronically transmitted by the responsible health department to the responsible state authority by the next working day at the latest.

From there, the information must be transmitted to the RKI no later than the next working day. This data must not contain the name, place of residence or contact details of the person concerned.

More: You can find the latest developments in our news blog

“Anne Will”: Lauterbach names the prerequisites for opening outdoor restaurants

Now, of all times: the DAX slump comes at an inopportune...

Xiaomi comments on allegations by the Trump administration

“Pretty in Plush”: Jessica Paszka wins – this star was behind...