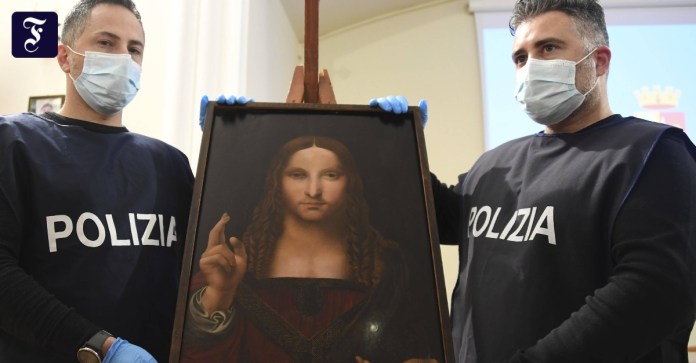 D The  fact that the Savior of the World can take shelter in the most modest of dwellings, and sometimes not entirely voluntarily, should not surprise anyone shortly after Christmas. Not in a stable and surrounded by pious devotion, however, Italian police officers have now found the “Salvator Mundi”, but in a simple apartment in Naples, more precisely an apartment in Strada Provinciale delle Brecce, from which one subito to the arterial roads to the north or airport can turn.

So there he stood, the kidnapped Redeemer, and raised his right hand in a gesture of blessing as if in greeting. If this were about a Netflix series, we would be dealing with “Salvator Mundi”, which emerged from the dark of history in 2005 and was attributed to Leonardo da Vinci, in 2017 for the record sum of 450 million dollars in New York at Christie’s was sold and became the most expensive painting ever auctioned.

Savior on a sailing trip

Rumor has it that this Christ in a frontal view with a blue robe and crystal ball is rocking on the yacht of the Saudi Crown Prince Mohammed bin Salman off the coast of Arabia.

The  fact is that he neither traveled to the Leonardo blockbuster show at the Louvre in Paris nor arrived at the museum’s branch in Abu Dhabi.

The  “Salvator Mundi” in the Neapolitan apartment, on the other hand, is not about this superstar, but one of two well-known doppelgangers who are quite similar to him.

Presumably made around 1510 by a pupil of Leonardo’s, the world saver wears red in this version (not red and blue like the third “Salvator Mundi von Ganay” who stood in as a substitute in the Louvre).

The  painting once reached the city on Vesuvius from Milan via Rome and was presented in the museum of the Church of San Domenico Maggiore – until it was stolen. When exactly? If you only knew that, because the loss was not noticed immediately. Only when the police, alarmed by investigations, recently asked the prior of the church, did the latter look into the also closed room of the Salvator in the corona-related museum, which no one had entered for a long time. Lo and behold: emptiness.

450 million dollars for the original, of which only two good copies exist, arouse desires with a view to this, especially since, according to current knowledge, only fifteen paintings by the master’s hand have survived.

The  true face of the Savior

How quickly the adrenaline level rises as soon as it comes to the Renaissance universal genius par excellence, could also be observed in December when the Italian art historian Annalisa Di Maria discovered a red chalk drawing in a private collection in Lecce with a Savior’s face possibly drawn by Leonardo in three-quarter profile. “This is the real face of the ‘Salvator Mundi'”, she said in the style of a modern Veronica and thus cast doubt on the other pictures.

The  Leonardo show in the Louvre in Paris is extremely explosive for the global art business.

The  Ascension of the Redeemer in red ended happily on Saturday just a few kilometers from the place from which he was snatched. Apparently the handling of the hot goods was a size too big for the thieves. It is unlikely that the 36-year-old owner of the apartment, who was arrested, was alone behind the crime.

Continuous Delivery Foundation is looking for project ideas for Summer of...

Germany: Corona aid is being evaporated – massive effects for the...