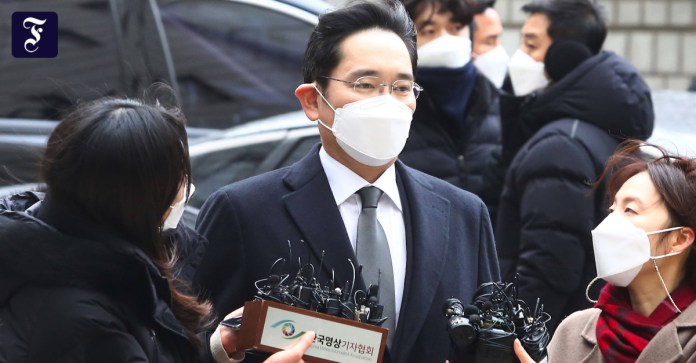 Dhe relations between the large companies in South Korea and politics have traditionally been close.  The  net has loosened over the past few decades, but it still has its traps ready. In one of these traps, the actual head of the South Korean Samsung conglomerate, Lee Jae-yong, has now finally got caught.

The  Seoul High Court sentenced Lee to 30 months in prison on Monday for bribery and embezzlement. Lee was arrested immediately after the verdict.

Correspondent for business and politics in Japan, based in Tokyo.

Even if he will be able to exercise his influence over Samsung from prison, the arrest will weaken the strategic leadership of one of the largest electronics companies in the world. For Lee, the grandson of the Samsung founder, it is also becoming more difficult to organize the inheritance in the Samsung group. His father, Lee Kun-hee, died in October after being bed-bound for years after suffering a heart attack.

After the verdict, shares in the conglomerate on the Seoul Stock Exchange fell significantly. Samsung Electronics, the economic heart of the group, lost 3.4 percent. Samsung C&T surrendered 6.8 percent. One year earlier in prison, Lee is counted towards the sentence, so the conglomerate has to do without him for up to 18 months.

The  appeal is open to Lee. But Korean lawyers consider this to be hopeless, because Lee would have to argue on legal errors and the Supreme Court had already ruled in the process.

The  52-year-old Lee was convicted for the first time in 2017 in the wake of the corruption affair surrounding President Park Geun-hye, who was dismissed at the time. Samsung had supported the riding training of the daughter of a park confidante in Germany by buying horses and making payments to a sports foundation. In return, Lee is said to have received the president’s support for the generation change at Samsung. It was about the approval of the state pension fund to a merger of Samsung companies, which strengthened the influence of the Samsung heir on the conglomerate. Park was sentenced last week to a 20-year prison term by the South Korean Supreme Court, including citing the Samsung bribery case.

Lee was imprisoned for a year at the time and was released in February 2018 after his five-year sentence was halved and suspended. This judgment was rejected by the Supreme Court in 2019 and referred to the Higher Court for renegotiation. In the new ruling, the bribe is set at 8.6 billion won (6.5 million euros). Lee is also charged with violating financial market laws and embezzlement in another case. It is about the merger of Samsung C&T and Cheil Industries, which indirectly also played a role in the bribery case.

Vienna Stock Exchange (opening) – ATX in the morning with price...

The “Bucs” are working on the NFL coup: Brady? Impressive! Royals are waving hundreds of millions of pounds from wind farm...

Paul Walker: Daughter Meadow remembers her father on the day she...