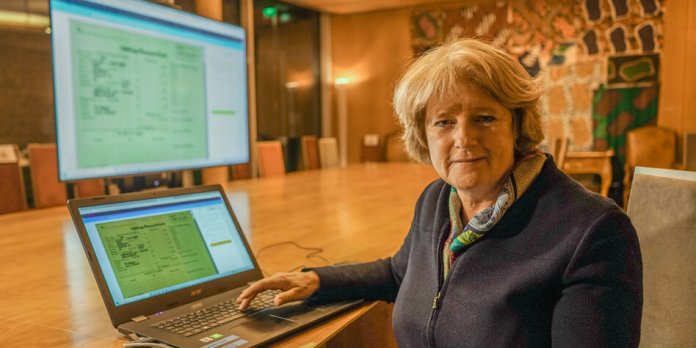 Wednesday, January 27th, is World Holocaust Remembrance Day. Despite the pandemic, there are numerous events in Berlin around the event.

BERLIN taz | It could have an advantage if almost everything is in the corona-related deep sleep: In the absence of distraction and alternatives, one could think about important things. This week, for example, on the Holocaust Remembrance Day on January 27th. Despite the pandemic, there are also many events this year.

One started on January 21st and is still going up to and including this Wednesday: In an impressive light installation, the Names of Holocaust victims projected onto the facade of the French embassy. With the art project of the Bremen media artist group Urbanscreen, we citizens are also called upon for the crowdsourcing initiative everynamecounts to participate.

Those living in northern Hesse want to use this hashtag Arolsen Archive – the world’s largest collection of documents on Nazi victims and survivors “Digital memorial for the victims of National Socialism” to build. Everyone can contribute to this by helping to capture the names and dates of Holocaust victims from already digitized documents. Easy to understand instructions explain briefly how to do it – you can start actively commemorating from your desk at home.

Those who are planning a walk through Mitte these days should also go to the State representation of Lower Saxony Stop by across the street from the Holocaust memorial. It’s on the fence there Exhibition of the International Auschwitz Committee “What have we achieved – Auschwitz survivors take stock” to see. For the survivors, Remembrance Day in the 76th year after the liberation of Auschwitz is not only a day of remembrance of the victims, but also a day of increasing concern for democracy, the committee said last Friday.

The  survivors looked “especially in these days with great apprehension at the challenges that democracies all over the world are facing due to anti-Semitism and right-wing extremist hatred,” said Christoph Heubner, Executive Vice President of the committee.

Even with many Memorial events in the districts it is often about the current confrontation with right-wing extremism. Not all were canceled due to Corona. In Pankow there is am instead of the traditional fairy lights Wednesday between 5 and 7 p.m. a Vigil in front of the former Jewish orphanage in Pankow in Berliner Straße 120/121. More information at www.lichterkette-pankow.de.

In Lichtenberg Is there a Light installation: Over 300 names of Jews expelled and murdered from Lichtenberg and Hohenschönhausen will be projected onto the gable wall of the town house (Museum Lichtenberg at the corner of Stadthausstrasse and Türrschmidtstrasse) on this day. According to the district office, the names will be read until the morning of January 28th.

The re are also numerous other events, lectures and readings online throughout the week. Some of them – including the memorial event for the Sinti and Roma murdered under National Socialism on Wednesday, organized by their Central Council – can be found on the website www.gedenkstaettenforum.de.

Vienna budget deficit according to the estimate at 1.9 billion euros

You can still watch the final here

Owners no longer want to sell their house