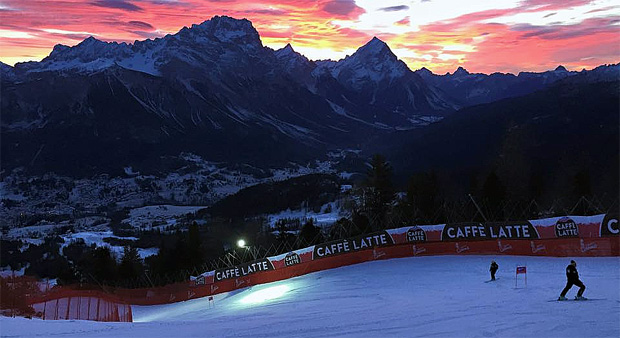 Benvenuti nel 2021: The World Ski Championships in Cortina d’#Ampezzo is just around the corner

Cortina d’#Ampezzo – Michelle Gisin and Matthias Mayer’s recent Ski World Cup victories are now part of ski history and a turbulent 2020. Shortly after the turn of the year and the eagerly awaited Alpine Ski World Cup in Cortina d’#Ampezzo, the organizers are working feverishly on it to create an unforgettable sporting event. Between February 7 and 21, the world’s best ski aces will fight for world championship precious metal. Many want to establish themselves, dramas are written and new heroes can be born.

The opening ceremony will take place in just over 30 days. But first the athletes have to qualify for the winter sports highlight of the year. The organizing committee worked tirelessly and not only focused on the sport and the infrastructure. An important concern was the implementation and preparation of a Covid 19 safety plan to protect the health of all participants, but also the population.

The last World Cup races of 2020 were interesting and exciting at the same time. After 18 years, a Swiss woman won a World Cup slalom at Semmering. Michelle Gisin not only relegated Austria’s Katharina Liensberger, but also Mikaela Shiffrin from the USA, who dominated this discipline, and Petra Vlhová from Slovakia. And the Norwegian Aleksander Aamodt Kilde is doing everything to win the overall World Cup again. But the competition, first and foremost Alexis Pinturault from France and Marco Odermatt from Switzerland, are threatening him. Thanks to Matthias Mayer’s achievement on the Stelvio, the Austrians, who have not won a race before they left Bormio, now want to start overtaking.

In the disciplines we recognize interesting personalities who wear the red jersey of the leader. Petra Vlhová has the edge in slalom. Henrik Kristoffersen from Norway is ahead in the same discipline. In the giant slalom we can see that the Italian Federica Brignone and the Swiss national Marco Odermatt enjoy the place in the sun. Ester Ledecká from the Czech Republic dreams of the Super-G crystal ball like Odermatt’s team-mate Mauro Caviezel. In the downhill run, two women, namely the Swiss Corinne Suter and the azure blue representative Sofia Goggia, hold first place, while the Viking Aleksander Aamodt Kilde, winner in Val Gardena, holds this position.

Without a doubt, the results so far can only be viewed as an interim assessment. January is the toughest month in World Cup events. There is hardly any time for skiers to breathe. The classics in Adelboden, Wengen, Kitzbühel, Schladming, St. Anton, Flachau, Garmisch-Partenkirchen and many other races are on the packed program. One small mistake can mean the end of dreams when it comes to crystal. With more than 25 events between giant slalom, slalom, super-G and downhill, we will also see who will become World Cup favorites when it comes to World Cup gold, silver, bronze and sheet metal in the Bellunese Dolomites .

The women will also fight for hundredths of a second and top placements in Chamonix and at Plan de Corones. You can also say: goodbye 2020, welcome 2021. The Alpine World Ski Championships in Cortina d’#Ampezzo, the Olympic site from 1956, are within your grasp.

Netflix starts the new year with these highlights

Volksbank and ERGO extend cooperation until 2032

FFP2 masks: where they come from and what they cost

Trump gives the first TV interview since the US election –...