More and more hospitals, especially in the south of England, are reporting shortages of staff and beds. And that just seems to be the beginning.

The whole of Great Britain has been in one again since Tuesday national lockdownwhich also includes the closure of all schools and universities. It should last at least six weeks, but could also drag on into March, as one minister admitted. The entire population is encouraged to stay at home.

“The coming weeks will be the toughest yet,” said Prime Minister Boris Johnson. Only “essential” purchases, visits to the doctor and pharmacy, absolutely unavoidable trips to work and “physical activity” outdoors once a day are allowed. Restaurants and pubs can offer take-aways or food delivery, but otherwise remain closed, as do most shops.

Travel is only possible in exceptional cases. Scotland has already closed the border with England to normal traffic. In order to have the new regulations for England approved by Parliament in Westminster, the members of the lower and upper houses have been called to a special session for Wednesday.

The reason for the return to the measures that were first taken at the beginning of the pandemic is the rapidly growing concern that all previous restrictions will not be able to stop the virus. In December alone, the Number of new infections every day more than quadrupled in the UK. The number of Covid patients in hospitals is now almost 25,000 higher than at the record time in April last year.

Some patients have to wait hours in ambulances in front of the emergency room entrances.

And the total number of deaths is over 75,000, according to government figures. British experts warn that more than 100,000 deaths will be by mid-February if the rapid spread cannot be stopped quickly. More and more hospitals, especially in the south of England, are reporting space problems and staff and bed shortages. Occasionally, delivered patients have to go to the entrance to the respective emergency room waiting for hours in ambulance or even be treated in the car.

In England there is now alarm level 5, the highest level. This means that without drastic measures, there is a risk that the healthcare system will be completely overwhelmed within 21 days. A London clinic canceled urgent cancer surgery this week.

Prime Minister Boris Johnson, who hesitated for a long time to take appropriate measures despite early warnings, has drawn sharp criticism. When a new upward trend was already announced in October, Johnson rejected the opposition’s call for a “lightning lockdown” for the entire country. In November he issued tougher restrictions, but promised his compatriots the opportunity to go shopping and socialize over the Christmas period, although experts advised against it.

Only the confirmation of a in southern England rampant «new variant» of the virus let him cancel this “Christmas break” at short notice – to the annoyance of many Britons who had already forged all kinds of Christmas plans. Even before Christmas, his advisors warned him to keep the schools temporarily closed after the holidays. Last Sunday, however, Johnson urged the parents of elementary school students to send their children to school on Monday morning. On Monday evening he announced the new lockdown – with schools being closed for an indefinite period.

There are also new questions for Vaccination policy. One million people in the UK are now believed to have received their first dose of vaccine. However, there are doubts that, as promised by Johnson, two million people can be vaccinated every week from Monday. The decision to wait twelve weeks between the first and second vaccination course is also highly controversial. Many British doctors think this is risky.

This erratic and often belated reaction has drawn sharp criticism from Johnson’s own party. Apparently, motions of censure against Johnson have already been deposited with a committee responsible for voting out Tory chairmen. In 2019, the committee played an important role in Theresa May’s resignation.

“Starmania 21”: Who progressed in the second show

Women at the top of the group: “Equality is established when men also work part-time”

FC Schalke 04 only plays a draw against FSV Mainz 05: It would be difficult in the second division as well 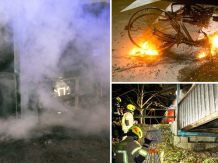 Ion Tiriac shoots Serena Williams and tells her to step down

Bremen: Pastor Olaf Latzel convicted of sedition during the trial

Refugees from Syria in Berlin: Alone on Chios