Berlin (dpa / bb) – Because he is supposed to be responsible for a series of break-ins, a 31-year-old stands before the Berlin district court. The man is said to have entered the city center twelve times via the roof or the roof terrace. In one case, he stole jewelry and cash worth a total of 31,000 euros, according to the indictment read out at the start of the trial on Friday. The defense attorney said that his client is expected to comment on the allegations on the second day of the trial on January 12th.

The 31-year-old was charged with acts between September 2018 and December 2019. Again and again he pried open patio doors or windows, according to the prosecution. The convicted man stole jewelry, watches, digital cameras and cash – the value of the loot is more than 70,000 euros. In three cases he “found nothing suitable”.

DNA traces found at crime scenes are said to have led the investigators to track down the 31-year-old. In August 2019, an arrest warrant was issued against the alleged burglar. He was arrested in Bavaria in December 2019 for other crimes and has been in custody ever since. There are three more days to February 2 for the burglary trial.

Today show: When Oliver Welke speaks ABOUT it, the director intervenes

Corona in Berlin: Tattoo artist – “This whole catastrophe has eaten... 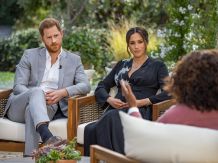 No secret wedding of Meghan and Harry

Coronavirus makes scientists famous – the hype about Christian Drosten and...