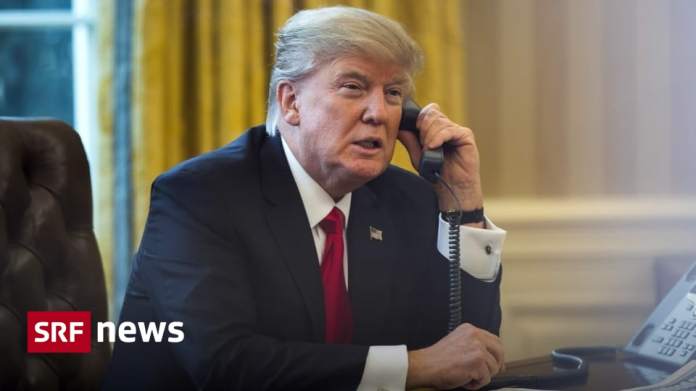 During the phone call, Trump threatened State Secretary Brad Raffensperger that he was taking a “great risk” and that he might be guilty of a crime if he did not act against election fraud.

The -US president later wrote about the conversation on Twitter and insulted his party colleagues as “clueless”.

“ What you say is not true”

“I just want to find 11,780 votes … because we won the state,” he said, according to the recording. There is nothing wrong with saying that the state secretary has recalculated the votes, said Trump. According to the Washington Post, Trump’s chief of staff Mark Meadows and lawyers for the Republican also took part in the phone call.

Raffensperger replied, according to the recording: “We have to stand by our numbers. We believe our numbers are correct. ”

The -State Secretary also pointed out that the results had stood up in court. He later wrote on Twitter, referring to Trump’s claims, “ With respect, Mr. President, what you say is not true.”

The -Democrat Joe Biden was ahead with around 12,000 votes.

The -final result changed only slightly even after two recounts; there was no evidence of election fraud.

The -goals of the future President Joe Biden in the next two years will be decided on January 5th in the US state of Georgia. Two races for seats in the powerful US Senate remained open in the elections on November 3 due to a lack of clear results.

The -runoff elections will now decide whether the Republicans will lose the Congress Chamber to Biden’s Democrats.

The -Democrats were able to hold the majority in the House of Representatives; to control the US Senate, they have to win both runoff elections in Georgia because the Republicans have already secured 50 of the 100 seats. A stalemate of 50 to 50 votes could break the future Vice President Kamala Harris in her role as Senate President in favor of the Democrats.

The -Democrats reacted indignantly to Trump’s urging by phone.

The -elected Vice President Kamala Harris described the procedure as a “brazen abuse of power”, which reveals the voice of despair. Former Democratic presidential candidate Julian Castro said on Twitter: “

The -President of the United States is blackmailing state officials to try to steal the election he lost.”

It will be official on Wednesday

Trump continues to refuse to acknowledge challenger Joe Biden’s victory. He is to be sworn in as the new President on January 20th. In the formal US election procedure, the certification of the results from the individual states in Congress is due on Wednesday. Only then will it be official who has won the election.

Republicans from the House of Representatives and the Senate have announced that they will appeal against the results of individual states during the procedure.

The -disruptive action can delay the confirmation of Biden’s election victory by a few hours, but has no prospect of actually changing anything in the election outcome.

Design mistakes can be really dangerous

Go for vaccine transport: this is how people in need of...