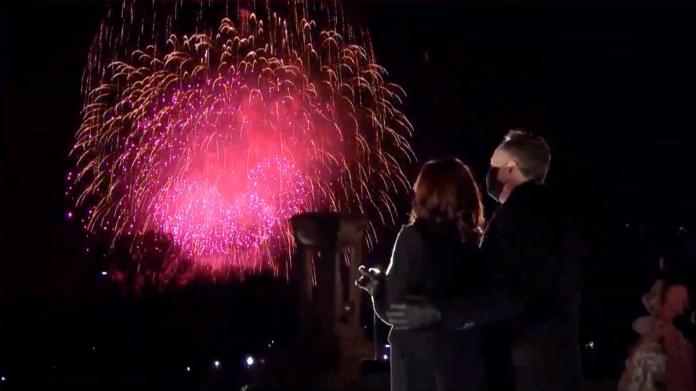 EAmerica does have a few advantages. For example: backdrops. Certainly, one could imagine a German main and state action against the backdrop of the Brandenburg Gate – but Tom Hanks, the good person from Hollywood in a black suit in front of the Lincoln Monument, surrounded by a circle of white light: That’s what the United States does after all so easily nobody after.

Or the real life Bruce Springsteen, who sings about American hopes and dreams on the steps of the Lincoln Monument, armed with nothing but an electric guitar, his gaze directed into the distance. Or a presidential address inside the monument, in which Lincoln’s immortal words by Gettysburg can be read carved in stone on the wall.

It is this mixture of looseness and dignity, of nonchalance and high-spirited patriotism, which one can perhaps call typically American.

The  actual ceremony – the inauguration on the steps of the Capitol – was a couple of hours ago, luckily no nihilistic mob had tried to murder Joe Biden and Kamala Harris, and so now there was a colorful cultural program at the best east coast time at 8:30 p.m. unwound.

Tom Hanks, here in front of the Lincoln Memorial, hosted the evening

When number 45 was introduced into office four years ago, he had the small problem, as is well known, that no well-known artist wanted to perform for him – a symptom of how little that president was in harmony with American culture. Joe Biden and Kamala Harris clearly did not have this problem. Who was there on that cultural evening?

Actually, you have to ask who didn’t appear.

The re was Justin Timberlake doing a fast paced act on the streets of Memphis, Tennessee.

The re was the Black Pumas, a black soul band from Austin, Texas.

The re were two country singers from Nashville, Tennessee. And there was Lin Manuel Miranda, the author of the musical “Hamilton”, which celebrated triumphs on Broadway before the pandemic – and who, in a duet with the 46th President, recited a poem by the Irish poet Seamus Heaney.

The re was something therapeutic about the whole thing. Maybe because of the pandemic – after so many months of being locked up in the home office, it was just liberating to see so many people working in the open air. (What would the organizers have done if it had rained or snowed that evening?)

After four years in which many Americans felt like a swimmer trying to cross a calm lake – and suddenly an evil spirit pulled the plug from below, the lake turned into a maelstrom, and it was difficult to get into the vortex of the Keeping scandals and catastrophes up – came a raft to hold onto.

The  story says: no hope / On this side of the grave / But then, suddenly, once in a lifetime / Justice rises like a wave / And hope and history become rhyme,” says Seamus Heaney’s poem.

If this evening had one theme, it was this: unity. “As we learned again, democracy is precious, and it was because of you that democracy survived,” said Joe Biden next to the giant statue of the giant President Lincoln. And he spoke of the “common love that defines us as Americans” and of the “common enemies” of the American nation: “hatred, violence, disease and hopelessness”.

If you wanted to remember what it was like in the insane reality, you just had to switch over to Fox News. CNN, MSNBC, and the public television broadcaster PBS broadcast the cultural program together – Fox News did not.

The re was Tucker Carlson’s pale face to be admired. Later, a red-capped, high-pitched guest of Sean Hannity spoke of the House and Senate Republicans having sold themselves to Joe Biden and the Democrats, and that if No. 45 were to start a new political party, he would go straight to nirvana follow.

Back in the colorful cultural program, everyday heroes were celebrated: nurses, parcel carriers, teachers, a boy who provides food for the hungry.

The  Vice President gave a very brief, very poignant address near the pool of water in front of the Lincoln Monument, where over fifty years ago over a million people were listening to Martin Luther King.

After that, three ex-presidents stood in a semicircle in front of the White House – Obama, Clinton and George W. Bush.

The y were affable.

The y swore their friendship over any political disagreement.

The y invoked the peaceful change of power as an “ancient American tradition”.

That tradition had failed in a terrible way two weeks ago. Millions of Americans still believe the big lie that number 45 actually won the election. And at Fox News, the mood makers don’t react to anything with greater anger than to the word “deprogramming” – they reject the idea that the followers of No. 45 are members of a cult that is gently brought back to reality would have to be offended.

But the fireworks at the end were still huge and beautiful. Only the picture of Jill and Joe Biden was even more beautiful, rocking to the beat of the music, with the 46th President having a grandson – or great-grandson? – carried on the hip.

These corona rules apply from Saturday in Lower Saxony

Bloomberg: iPhone 2021 with Touch ID, foldable iPhone in the test...

Serious allegations after the Islamist attack in Vienna: Reacted too late?