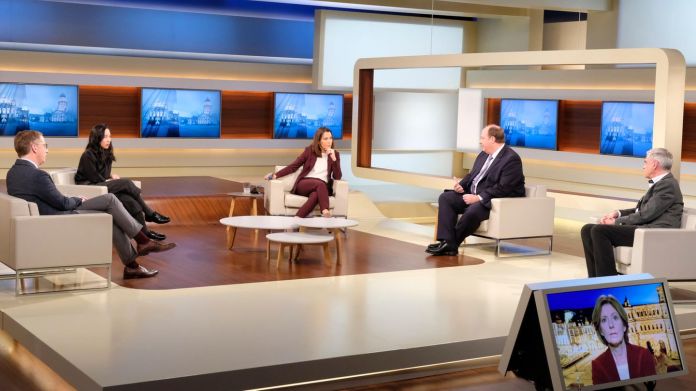 “Anne Will”
Controversy Zero Covid Strategy: How Much China Are We Ready To Endure?

The  round in Anne Will’s studio
© Wolfgang Borrs / NDR / stern

At Anne Will, politicians from the SPD and CDU speak out against a “zero covid” strategy and prefer to give people hopes for easing. How is that supposed to work? Well …

Concern about the new mutations of the corona virus is also growing in the Anne Will editorial team – “How much ‘unreasonable’ do you need now?”is therefore your question this evening.

The  greatest unreasonable demands are made by the supporters of the “Zero Covid” movement, which not only wants to control the virus, but also wants to eradicate it properly. That is why she wants to reduce all contacts to an absolute minimum, close factories, offices, factories, construction sites and schools and suspend work. Your guideline: a maximum of ten new infections per million inhabitants and day – for all of Europe.

Michael Hüther, Director of the Institute for German Economics, Cologne

Uwe Janssens, Chief Physician of the Clinic for Internal Medicine and Internal Intensive Care Medicine at the St. Antonius Hospital in Eschweiler

How did the discussion go?

The  two politicians in the group would like to radiate hope and convey the message that the country has basically come through the pandemic quite well so far. Yes, they keep talking about the “perspectives” they offer and about “opening strategies” that they would like to implement in February.

The  intensive care doctor Janssens vehemently contradicts: “We didn’t get through the pandemic well”. He repeatedly calls for “clear goals” without specifying them in detail. And the journalist Vu, who praises Taiwan and South Korea for their tough pandemic policy, is calling in vain for a tough lockdown and strict mobility restrictions along the lines of the “zero covid” movement. From their point of view, this “well-founded strategy” gives people “a future perspective”. But she cannot expect any support from either Helge Braun or Malu Dreyer. Dreyer considers the demand to be “so ambitious” that it cannot be politically enforced, Braun says that in an “open society” like ours there must be “a lot of movement”.

At the same time, Braun admits that it would have wished for a harder lockdown last year – but that it obviously failed together with the Chancellor due to the interests of the Prime Minister. For Janssens, the fact that they repeatedly ensure different Corona rules in their territories is the real problem why many people would wear Corona. Michael Hüther, as the spokesman for the economy in the group, is against the “zero covid” strategy: He simply considers it “unrealistic” and fears Chinese conditions. He prefers to debate which incidence figures society can handle in the long term. Janssens is already “afraid and anxious” at a value of 50, Hüther does not, he even thinks about 100 – which is why he has to hear from Ms. Vu that he is “cynical” because he accepts corona deaths. But Hüther doesn’t want to discuss things like that, and a hard lockdown also has fatal consequences. He wants to put the measures and the risk “in relation” and calls for better empiricism, also at the expense of data protection: 80 percent of the infections are still “not assignable”, said Hüther. “We are doing everything we can to protect vulnerable people,” says Helge Braun once more in a calming tone, and that there are 30 million in Germany.

Political decision-makers do not want to talk about even more and tougher “impositions”, that is an imposition for them.

The y prefer to talk about the fact that we all actually agree on the goal. And as far as these mutations are concerned: Nothing specific is known.

After corona infection: Geiger can hope for a tour start –...

Corona: EU wants up to 300 million more vaccine doses from...

“Lateral thinkers” have spread the coronavirus in Germany

ABOUT US
DE24 News English is your news, entertainment, music fashion website. We provide you with the latest breaking news and videos straight from the entertainment industry.
Contact us: d[email protected]
FOLLOW US
© de24.news