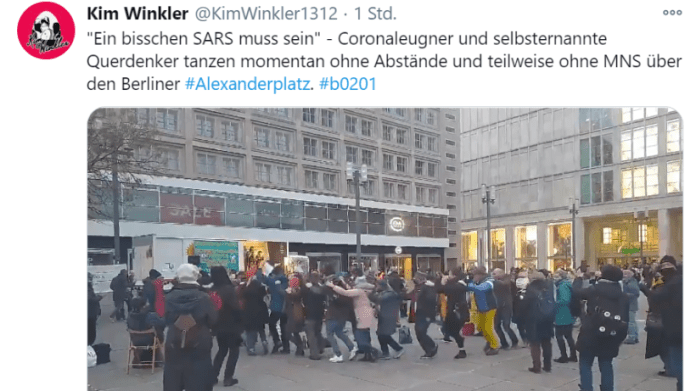 “Unconventional thinkers” dance and sing without any distance on the Alex

More than a dozen people disregarded the Corona rules on Alexanderplatz. Some of them danced and sang without a mask.

Berlin. More than a dozen people sang and danced together on Saturday on Alexanderplatz in Berlin, disregarding the Corona distance rules and sometimes without a mask. As can be seen in a video broadcast on Twitter, the men and women formed a polonaise and moved to a song with the lyrics “A bit of SARS must be” to the tune of “A bit of fun must be”.


A police spokesman confirmed that participants in the “lateral thinking 30” rally on the Alex became suspicious of singing without mouth and nose protection. They were checked on Saturday afternoon. Officials recorded personal details, checked certificates and, if necessary, made advertisements, the police tweeted. The line of text audible in the video was also heard at least once by the police.

Horror at the corona demonstration in a Berlin supermarket

In mid-December there was a similar demonstration in a supermarket in Prenzlauer Berg. A group of suspected corona deniers visited the supermarket without wearing the mandatory mouth and nose covers.

Virtual soup cooking or gin and tonic party: the head of...

“Freedom” rules cause massive criticism in …

Air traffic over Germany even weaker in February