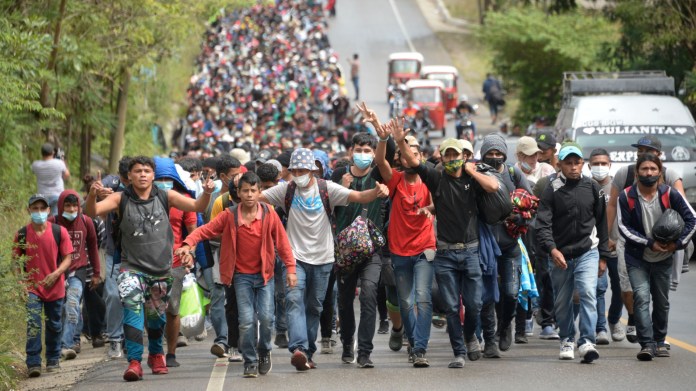 The  new US President Biden has, among other things, decreed that people without a residence permit in the USA should have the chance to obtain a residence permit. This also gives hope to migrants, especially from Central America.

Dozens of migrants have gathered in front of the Mexican refugee aid office in Tapachula, in the Mexican state of Chiapas, right on the border with Guatemala. Your destination is actually the USA.

The y surround a burning blue and white paper mache cube – with messages aimed at the new US president: “We ask for humanitarian aid” is written on one side in black letters. Pictures of it are shared on social networks.

The re are also demonstrations in other parts of the city – it is primarily Hondurans who want to draw Joe Biden’s attention to their desperate situation.

The  Mexican activist Luis Garcia Vallagran tries to support the migrants as much as possible. He told Reuters news agency:

“Honduras has been badly hit by two hurricanes. Around a million people are now homeless.

The y are faced with nowhere.

The se people have left the country because it is their only option. We ask Joe Biden to keep the promises of his campaign and not just empty words. ”

Just in time for the inauguration of US President Joe Biden, the first migrant caravan from Honduras set out this year. Most of them did not get far, however: on their way north, the migrants were forcibly stopped by security forces in Guatemala – around half of the 9,000 people were sent back to their homeland, Honduras.

Mexico has also further strengthened its border in view of the migrant caravan and sent 500 National Guard security forces to the south of the country. Former President Donald Trump had threatened punitive tariffs of up to 25 percent in the past if the country did not intercept the people in the south.

Tens of thousands of migrants stranded

Mexico became a waiting room. For months, 70,000 migrants have been waiting in the north alone, on the border with the USA.

The  Cuban Yaneth Blanco is stranded in Ciudad Juárez. She left the socialist Caribbean island for political and economic reasons, she tells the Mexican online platform “La Verdad” – “

“Actually, I had already given up hope that I would come to the US. That is why I have already started trying to apply for papers and legal residence status here in Mexico. With the new US President Biden, I now hope that I will I’m still getting asylum. I can’t go back to Cuba. I’d like to work in the health sector, here or in the USA. But everything is uncertain right now. I don’t know what will happen next year. ”

In Mexico she has been waiting for a year and a half for her asylum application to be processed. Under pressure from Biden’s predecessor Donald Trump, the migrants had to wait for their trial in the neighboring country.

Biden now wants to reverse this “Quédate en México” program – stay in Mexico. Just a few hours after his inauguration, Biden had initiated a change of course. Also Trump’s expensive favorite project – he stopped the building of the wall.

“That’s a good thing. But you really have to say that in the end all presidents built a piece of the wall. Clinton, Bush, Obama, Trump built 386 kilometers. And Biden has now announced that he does not want to continue building the wall, that means zero meters for the next four years. I’m celebrating that. ”

With economic aid programs for El Salvador, Guatemala and Honduras, the government of Biden wants to tackle root causes of migration. In addition, she has presented a comprehensive immigration reform, the implementation of which will take time. Even if the wall is not raised any further, according to experts, Biden will also do everything to ensure that Mexico and the Central American countries stop people in the south – he will just put it nicer.

Good news for BVB fans – Erling Haaland is back

Netflix’s “Winx Club” adaptation has been criticized for whitewashing

Lionel Messi confirms the truce at FC Barcelona – nothing more How long will the lockdown last? What should be decided...