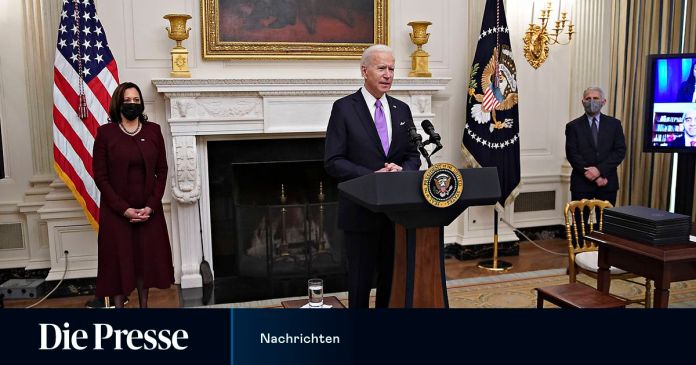 Everyone who flies to the USA will have to be in quarantine in the future: “Things will get worse before they get better,” said the new president.

The  new US President, Joe Biden, is tightening entry requirements in the fight against the corona virus. In the future, all travelers will have to be in a corona quarantine, Biden announced on Thursday. On the first full day of his tenure, he put out a 200-page coronavirus strategy, warning, “Things will get worse before they get better.”

The  number of corona deaths should reach half a million as early as February.

“Anyone who flies to the US from another country will have to be tested before boarding the plane (…) and have to go into quarantine when they arrive in the US,” stressed Biden. He asked the Americans under the motto “Mask up!” also to wear a mask for the next 100 days.

The  “brutal truth” is that it will be months before all Americans can be vaccinated.

Containing the pandemic is one of the main concerns of the new president, who was sworn in on Wednesday. In the first few hours in office, Biden ordered a mask requirement in government buildings on Wednesday. On Thursday, he signed several other rulings to advance the fight against the corona crisis.

According to observers, Biden owed his victory against Donald Trump largely to the incumbent’s controversial handling of the pandemic.

The  Democratic challenger accused the Republican of being responsible for the high number of corona deaths. Whose statement that you have to “learn to live” with the virus, countered Biden with the words: “People learn to die with it!”

Three corona demos planned for the weekend: Police are getting ready...

Rescue workers give up hope after landslide in Norway – world...

Despite incidence over 1000: the Czech Republic lifts the state of...