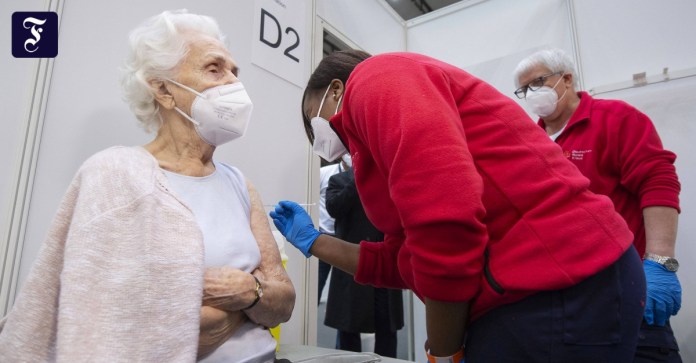 IIn the fight against the corona pandemic in Hesse, all 28 vaccination centers are said to be open from February 9th. Six regional centers started their work on Tuesday – in Kassel, Gießen, Fulda, Frankfurt, Wiesbaden and Darmstadt.  The  Ministry of Social Affairs speaks of a “milestone in the fight against Corona” (see tweet). A good 77,000 Hessians have now been vaccinated, including 3,000 second vaccinations. Meanwhile, the Robert Koch Institute reported fewer new positive corona tests for Hesse overnight, but significantly more deaths in connection with the pandemic.

The  incidence, i.e. the new cases among 100,000 inhabitants recorded within a week, has fallen by more than 30 points compared to last Tuesday. However, it is still well above 100. If the deliberations of the Chancellor and the state leaders as requested by the Chancellery, the 15-kilometer rule could soon apply in all regions with an incidence of 50. 200 is still the limit. In the evening, however, it became apparent that the federal states did not approve of the federal initiative.

If it fell to 50, a number of districts in Hesse would not only have to perform a role backwards after they have just lifted the curfews and the 15-kilometer rule. Rather, according to the current state of affairs, all people in Hesse should adjust to a correspondingly limited range of motion.

The  same applies to Rheinhessen with Mainz and the Bavarian Lower Main with Aschaffenburg. Because only Kassel is within range of the 50 mark with an incidence of 67.

The  Wiesbaden Administrative Court has meanwhile decided in an urgent procedure that the general decree of the Limburg-Weilburg district, which also contains the 15-kilometer regulation to contain the corona pandemic, is partly illegal.

The  information contained on the 15-kilometer rule is lacking in “sufficient certainty,” said the court on Tuesday. However, the content must be “so complete, clear and unambiguously recognizable” for those affected that they can adjust their behavior accordingly.

In the order that came into force on January 11th, it says: “

The  radius of movement for day tourist excursions is limited to a radius of 15 kilometers from the place of residence (political municipality).”

The  court found that the term “political municipality” was already questionable, that this “should not be understandable by itself for a large part of the population”. It is not clear whether the boundary of a district or the entire municipality is meant and how the 15 kilometers from the place of residence are actually to be measured.

The  decision is not yet final.

In the Darmstadt vaccination center, Interior Minister Peter Beuth (CDU) announced that the remaining facilities will follow on February 9. This should also happen if there are more limited vaccine doses. In the six regional centers, people in the highest priority group have been vaccinated against the virus since Tuesday.

The se are predominantly men and women over the age of 80.

Previously, there had already been vaccination doses for residents and employees in old people’s and nursing homes as well as staff in corona intensive care units. Beuth previously explained in the FAZ interview that the country was well prepared and justified the bumpy start. According to the Ministry of the Interior, there will be around 60,000 appointments for the six centers that are now being launched.

This is due to the limited availability of vaccines, emphasized the interior minister, who visited the Darmstadt center together with social minister Kai Klose (Greens). Initially, more than 400,000 people in Hesse who are 80 years of age and older are to be vaccinated. Subsequently, predominantly people over the age of 70 have the highest priority. This group also includes close contact persons for elderly people in need of care and people with certain disabilities or previous illnesses.

The  number of corona cases in Hesse increased by 450 on Tuesday compared to the previous day, a week ago the RKI reported 503. This means that the total number of infections since the beginning of the pandemic is 159,409, according to data from the Robert Koch Institute in Berlin (as of 12:00 a.m.) on Tuesday. With 7141 cases nationwide, Hesse is slightly below the eight percent share that the state has in the total population.

The  number of deaths in connection with the corona virus rose by 109 to 4072, as of last Tuesday the RKI had become aware of 75. Within seven days, 129 new infections per 100,000 inhabitants were registered nationwide, this figure corresponds to the incidence value. Seven days ago it was 162.5.

According to the RKI data, only the district of Fulda in Hesse is in the so-called incidence with a value of 258.1 in the highest level of the state’s escalation concept.

According to the Robert Koch Institute, 77,071 people in Hesse have now received a preventive tip against the corona virus, including 3,000 second vaccinations.

The  vaccination quota is 1.2 percent of the Hessian population.

The  western states of Schleswig-Holstein (2.4), Rhineland-Palatinate and Bavaria have a higher proportion, with Mecklenburg-Western Pomerania remaining in the lead in Germany (2.4).

Berlin libraries are closing due to Corona

Berlin & Brandenburg: Dangers in an occupied house: District urged to...