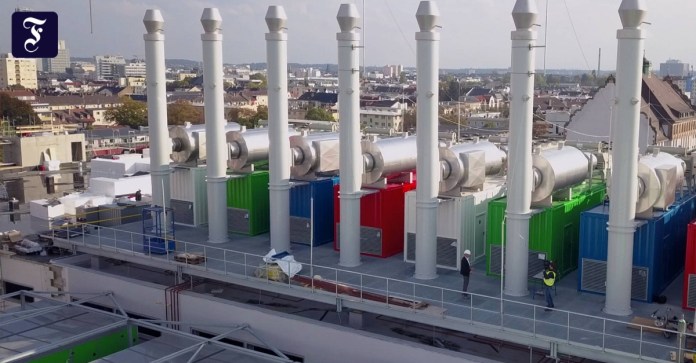 Dhe customers know where they want to go: Frankfurt, northern side, as close as possible to the De-Cix Internet hub and the nearest substation.  The  data center operator Vantage Data Center, which has a strong presence in America, came up with this wish list when it decided to open its first location at the world’s busiest Internet hub in Frankfurt.

It turned out a little differently.

The  American operator’s recently opened Frankfurt campus is now in Offenbach, because instead of planning a project themselves, they acquired the European provider Etix Everywhere in February 2020 and with it its construction project south of the Main.

The  European boss was there, so to speak: the French Antoine Boniface was one of the founders of Etix Everywhere in 2011. Unlike the people in charge at Vantage, he knows his way around the European market – and he also studied it in Frankfurt.

At the preferred locations for data centers in Ostend and in the west of the city, space is scarce, but the competitors had hardly paid any attention to Offenbach, south of the Main, to date.

The  location there has a considerable advantage: It is only one kilometer away from the power station of the energy supplier Evo.

The  power supply for large consumers – a requirement of 55 megawatts is envisaged in the last expansion stage – is thus secured. And the De-Cix in Ostend is also close by. “

The  customers were easy to convince,” says Boniface.

The  company provides the building with cooling, security, emergency provisions and connections, and customers rent space for cables and data storage.

The  parent company, which is one of the largest colocation providers in the world, is making a total of two billion euros available for its expansion into Europe. In addition to those from Etix Everywhere, the Americans took over the data centers of the British company Next Generation Data in the summer. In the Rhine-Main area, it should not stay at one location, as Boniface announced. He is already in the process of acquiring another property in Frankfurt.

The  majority of the customers who set up their servers in the well-secured cold stores of Vantage DC are the giants of the Internet world, a fifth of the customer base are large German companies, according to Boniface. This is seldom different with the other operators of the more than 60 colocation data centers in Frankfurt and the surrounding area. Vantage DC wants to set itself apart from them, among other things, with high energy efficiency. “We try to be one of the best providers when it comes to sustainability,” promises Boniface.

The  Offenbach data center is fed exclusively with electricity from wind energy from the Evo, and there is no water cooling.

So far, no provider has had much trouble renting out the server spaces. Demand continues to outstrip supply. “

The y have to be so that the settlement directly on the De-Cix pays off, after all the costs on the Main, especially the land prices, are higher than elsewhere.

The  operation of a data center in Berlin is about ten percent cheaper than in Frankfurt, says Boniface. It is not without reason that Vantage DC is building further large locations in – from a Frankfurt perspective – German B-locations, for example in Munich and Berlin.

The  data center in the capital is to be even larger than the one in Offenbach with an energy output of 64 megawatts.

Alexander McQueen and Vestiaire Collective are pleased to announce a future-oriented...

Conversation with the Queen: Harry and Meghan say goodbye for good

Chaos and dispute during vaccination – Chancellor, it must NOT continue...