VfB Stuttgart is pressing ahead with the squad planning for the coming season. After several professionals have already extended their contracts in the last few weeks, the Swabians are now binding young talent Jakov Suver to the club for the long term!

As VfB announced on Friday, the central defender signed a contract on his 18th birthday until the end of June 2025. Suver has been training with the Swabians since 2012 and has played through all of the Bad Cannstatter junior teams.

“Jakov has developed very well in recent years,” said sports director Thomas Hitzlsperger about the extension. “We trust him to make the leap into the professional field in the medium term and are therefore very pleased that he has identified himself with the path we have shown and signed a long-term contract with VfB.”

Suver also spoke up: “ The  past few years at the VfB NLZ were very important for my development. I feel good all round and I am convinced that the conditions here are ideal to make the leap to professionalism. For this goal I’ll keep working hard. ”

Because of additional customs costs: BMW increases car prices in the...

Two ladies-in-waiting are now a couple – coming out! 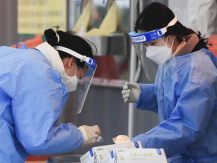 Corona numbers are rising again: 2,311 new infections on Tuesday in...

Duchess Kate: Another baby? Insider: “She is ready to try”