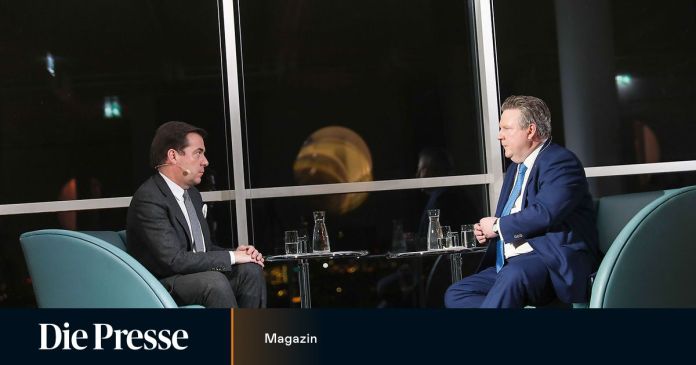 Mayor Michael Ludwig announces a fourth Corona aid package for the Viennese economy during the “conversation in the tower” with editor-in-chief Rainer Nowak.

It was a first. Vienna’s Mayor Michael Ludwig was the first guest of the “Talks in the Tower”, who answered questions from the “Presse” editor-in-chief and publisher Rainer Nowak for the second time.  The  pointed conversation took place on Tuesday evening in the Vienna Ringturm – “Die Presse” and the Wiener Städtische Versicherungsverein had invited to the exciting discussion event as part of a cooperation, which was also broadcast on the “Presse” website.

Corona package will be decided next week

The  first time Michael Ludwig was a guest in the “most beautiful TV studio in Vienna”, according to Rainer Nowak with a view from the Ringturm, Ludwig was not yet mayor, but ran for the successor to Michael Häupl. Back then, the conversation was about the growing city and its challenges. “

The se were real luxury concerns compared to today,” Nowak introduced the conversation in which the mayor made a surprising announcement: “We are planning to decide on a fourth Corona aid package,” said Ludwig, who emphasized that it would not be about a vague plan, but a concrete project that should be decided at the next meeting of the city government. “

The  exam is next week.”

The  pandemic and its effects will keep Vienna busy “for the next few years,” said the Mayor of Vienna. To believe that with the corona vaccination the crisis will be over in the course of this year is not true: “

The re will be numerous consequences in the next few years.”

The  recent appearance of Ludwig with Federal Chancellor Sebastian Kurz (ÖVP) at the announcement of the new tightening of the lockdown met with great interest. Was the presence of the powerful chairman of the Viennese SPÖ a sign of a quick coalition change? Ludwig denied it: If Chancellor Kurz and the Greens consume the third coalition partner, there will be new elections. Regarding his appearance at Kurz’s side, he said: “I was asked by the Federal Chancellor and then asked for some time to think it over.”

Time to think? He first discussed this with SPÖ federal party leader Pamela Rendi-Wagner in order to coordinate with her, said Ludwig. His appearance at the Chancellor’s side was intended to signal “that we are in line with the federal government in this corona crisis, especially because of the new mutation that has occurred, and that we support and support these measures.” first appearance with the Chancellor, “explained the mayor, referring to the joint visit to a corona test station – in order to immediately differentiate himself from the ÖVP in the next sentence:” That does not mean that we have settled the political differences, “said Ludwig in allusion on turquoise attacks on red-ruled Vienna during the Vienna election campaign.

Until recently, the SPÖ was not on the line of government in the fight against corona. Nowak wanted to know where the change of heart came from: “

The  big change came in the days when you saw how the mutated virus had developed,” said Ludwig, referring to the agreement of all experts about the dangerousness of the new virus: “That’s why we have broadly supported the hard, unpopular line (instead of loosening a tightened lockdown, note). “

Is there a new gastro voucher coming?

Corona is causing problems in the catering, entertainment and tourism sectors. Ludwig: “Unfortunately, we have to expect that there will still be effects in the next five years – especially in tourism.” Although Ludwig did not rule out a new edition of the Viennese gastro voucher. (stu)

Health authority expands the circle of those entitled to vaccinate | NDR.de – Nachrichten – Hamburg

Coronavirus: This is how many vaccination doses are stored in Central Germany

Corona and the economy: the state as savior

Corona vaccinations in many practices in April at the latest

Corona lockdown: These relaxations now apply in the countries Finland: Customs should do without corona detection dogs – Panorama

Blackout again: the next big blackout

Thomas Hundertpfund after the first victory in the pick-round: “So far...

Egle missed the podium in Oberhof despite the track record

Corona: Salzburg continues to be hardest hit by far