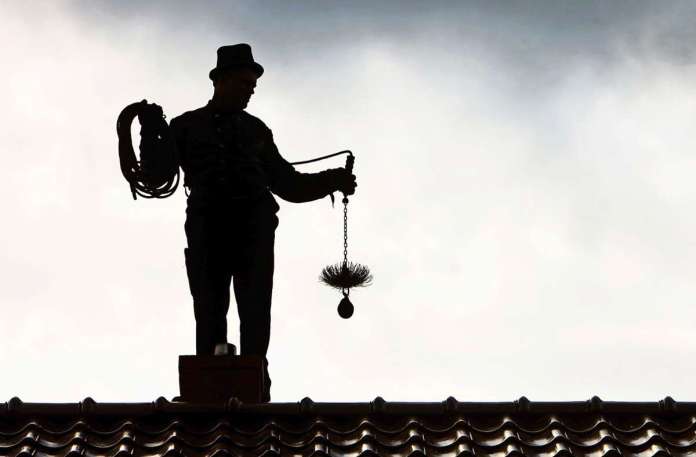 Even in times of strict contact restrictions, home visits by chimney sweeps, craftsmen or customer service representatives are necessary. For them there is a mask requirement. But visitors and customers do not always behave correctly.

The  reunion is extremely warm. Chimney sweeps and customers have known each other for years.

The y greet each other, go down to the basement together, and talk there for a quarter of an hour. When the visit was over, the householder’s daughter asked if they had kept their distance and a mask during the chat.

The  father falls from the clouds: he has not thought of that. And the chimney sweep apparently also appeared in the house without his mouth and nose covering.

Despite the strict Corona measures currently in place, this case is obviously no exception. “I had the craftsmen in the house because of water damage,” reports a man from Stuttgart. When the squad approached, one was wearing a mask, the other two weren’t. A subtle reference to this led to grumbling – and to the fact that the house owner withdrew from the basement as quickly as possible. When the craftsmen left the house two hours later, one of them was still not wearing a mask.

Even during lockdown, home calls from chimney sweeps, craftsmen and customer service representatives cannot always be avoided. “In fact, most of the companies continue to work. Of course, the complex requirements must and will be observed – of course also during house calls, ”says Gerd Kistenfeger, spokesman for the Stuttgart Region Chamber of Crafts. Because what many do not know: “For house visits like this there has been a mask requirement since December – similar to public transport.” Numerous other rules must also be observed.

In Kistenfeger’s experience, this works in most cases. “Fortunately, we have no current complaints. If employees and customers deal with the issue responsibly, the balancing act between order processing and health protection works quite well, ”he says. However, there are always inquiries from the companies and a great need for information. For this reason, the Chamber has compiled the answers to the most important questions on its website and also placed links there to the websites of the ministries and other associations.

“We can handle the situation. You have come to terms with it, even if masks are certainly a burden when you work physically, ”says Volker Jobst, spokesman for the Baden-Württemberg state guild association of the chimney sweep trade. However, various violations are also known among chimney sweeps. “

The re have been some complaints from customers. You talk to the colleagues concerned and give them a warning, ”said Jobst.

He also says that customers and chimney sweeps have often known each other for years. Obviously, some customers find it difficult to keep their distance. “In my experience, younger people are more cautious than older people.

The y like to stand right next to them out of interest. ”In general, the industry is observing a change in behavior in the current lockdown. “Last spring there were appointments postponed immediately after every address by Chancellor Merkel,” said Jobst. In each of the 923 sweeping districts, there were an average of 20 from March to May. This time the people weren’t as sensitive: “You may know how to handle it better now,” he suspects.

A reprimand from the house is possible

An in-house appointment currently looks ideal for everyone involved: Customer and visitor wear a mask, keep their distance and only exchange ideas as far as necessary.

The  craftsmen wash and disinfect their hands and ventilate wherever possible. “Many of our people also wear disposable gloves,” says Jobst. In the case of many older risk patients, the chambers and guilds found that the children take on such appointments. And if someone in the household is in quarantine or even falls ill, the tradespeople have to know this beforehand so that an individual solution can be found.

And what should be done if a visitor enters the house without a mask? “

The n you can speak to him as a customer and ask him to put one on,” says Kistenfeger. If he doesn’t want that or doesn’t have one, he just has to come back later.

The  Ministry of Social Affairs also points out: “

The  owner of the domiciliary rights can make the permission to anyone who wants to enter the house dependent on whether the minimum distance is observed or a mask is worn,” says a spokesman.

Volker Jobst, himself a district chimney sweep in the Rhein-Neckar district, has had mostly positive experiences so far. “

The  first three customers I went to this morning came across me with mouth and nose protection,” he reports. Both sides felt that they were in good hands. Because even if you’ve known each other for a long time: the close contact has to pause at the moment.

Party leader against US President – first he used Trump –...

KAC and Fehervar fix in the play-off

Does vitamin D help against the coronavirus?

72 professionals in full quarantine after arrival before Australian Open –...

Frankfurt shares end: Dax on the hunt for records again |...

First Dates Hotel: You have long since found love: These are...

“Let’s Dance”: Auma Obama is reduced to her brother – fans...