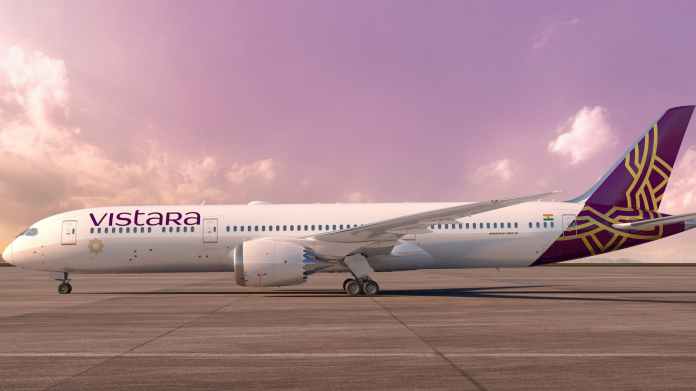 The still young Indian premium airline Vistara wants to expand further and is presenting the next direct connection to Europe.

Despite tightening the lockdown, the Indian airline Vistara is sticking to its plans to set up a direct connection to Germany. The travel corridor between Frankfurt and Delhi allows the airline to establish this connection. As Vistara announced, the new connection will be opened in the near future.

Register for the newsletter

All updates on Corona and the effects on your travels – in the free reisetopia newsletter!

With the Dreamliner to India

From February 18, Frankfurt will be connected to the metropolis of Delhi. In addition to the connections to London, the route between Delhi and Frankfurt will initially be served twice a week on Thursdays and Saturdays with a brand new Boeing 787-9. The Dreamliner will take off from Delhi on Thursday and Saturday at 3:30 a.m. and after a scheduled flight will land in Frankfurt at 7:55 a.m. Ideal for all business travelers who are on their way to Frankfurt on business. The return flight takes off shortly after noon at 12:40 p.m. and lands back in Delhi at 0:50 a.m. the next day.

Passengers in all three classes are promised exceptional service. The price includes food and drinks and an extremely extensive in-flight entertainment system consisting of films, series and music. If that’s not enough, you can surf the Internet for free on board. The airline also publishes a price table for the respective class of transport.

Due to the pandemic, Vistara has also taken extensive precautions for the hygiene of the crew and the aircraft as well as the service on board. Crew members wear protective equipment at all times on all flights to protect themselves and the passengers. After each flight, the entire aircraft is disinfected by a special cleaning team and cleaned as standard. In addition, the on-board service has been adapted to the conditions and a corona-compliant food and drink service has been offered.

From 1,700 euros in business class to India

Despite the new route, Vistara also refers to the prevailing entry requirements in both countries. Accordingly, passengers should inform themselves independently via the respective websites before booking. Anyone who has done this can look forward to interesting prizes in all three classes. Business Class with Vistara for return flights from Frankfurt can be booked for 1,700 euros.

The airline also offers transfer connections in Frankfurt and Delhi. In Delhi she mainly uses her own network. These connections are also already activated and can be booked via the website, the app or a travel agency.

Vistara is a young Indian airline founded in 2015 as a joint venture between TATA Group and Singapore Airlines. Due to the requirements of the Indian government, which for the time being only allows airlines to take on domestic routes, Vistara can only now begin to take up long-haul connections.

Accordingly, the airline is delighted to be able to fly to Frankfurt after London.

As a key gateway to Germany and an ever-thriving metropolis that is a global hub of finance, commerce and trade, Frankfurt is another significant addition to our route network that also strengthens our presence in Europe. India and Germany enjoy very strong ties, the impressions of which are visible in many areas including business, science and technology, that continue to fuel demand for travel between the two countries. Not only this, Germany is also home to hundreds of thousands of Indians and people of Indian origin. Flyers from both, India and Germany, will now have the choice of flying India’s best airline on this route that is trusted by millions of people for its world-class products, service and on-point hygiene and safety protocols.

Conclusion on the launch of the new Vistara series

In the middle of the crisis, Vistara is using the existing travel corridor and surprisingly opts for expansion. This means that Frankfurt Airport can look forward to an exciting new airline on a route that is highly competitive but still seems attractive. We are excited!

At home and outside: Mallorca forbids all private meetings due to...

RTL ends “Magda is already doing it” after season four

Moscow is heading for a snow record

The slayer comes to the campfire

Cyberpunk 2077 sets a great record, overthrows WoW from the throne

The capsule of the Hayabusa 2 spacecraft has landed safely on...