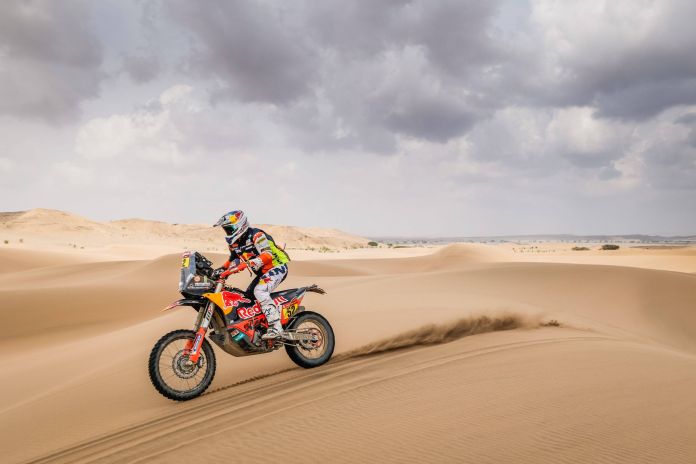 On Friday, KTM works driver Matthias Walkner took third place on the last stage of the Dakar Rally from Yanbu to Jeddah, as in the first section.

The  Salzburg man said goodbye with a strong race, even if he overlooked a barbed wire fence.

The  violent fall was mild. Overall victory was won by the Argentinean Kevin Benavides, 4:56 minutes ahead of defending champion and final stage winner Ricky Brabec (USA / both Honda).

Walkner’s KTM brand colleague Sam Sunderland (GBR) dropped from second to third overall. For Benavides it was the first overall victory of his career after 47:18:14 hours. For Walkner, after a clutch defect on the second stage and the associated loss of time of around two and a half hours (intermediate rank 43), it was a happy ending in tenth.

The  Dakar, which has been held in Saudi Arabia since 2020, was the 43rd edition of the long-term rally. “It was a cool race. I gave it another go today and I’m really happy to be healthy at the finish, ”said Walkner. Before the final stage, he had said that he hadn’t fallen once during the entire Dakar, but he praised the day before the evening. “

The n today I am driving at 60 km / h into a barbed wire fence that has not given way. It tore me off the motorcycle with full force, and luckily the lens was hard enough and only had a few scratches on the barbed wire. I’ve offended my lips and shoulders, and I can still see a few stars, but I’m fine. ”

In his opinion, the Dakar races are becoming more demanding every year. “That was a really brutal Dakar this year.” Walkner’s conclusion: “It was a very difficult Dakar for me this year. Everything started so well, but then the clutch defect, in which I lost almost two and a half hours. That shattered any hopes for a podium in one fell swoop and on the second stage. ” Nevertheless, he tried everything and except for the last two days had “extremely much fun”.

The  motivation for “the golden pineapple” was sometimes difficult, admitted the Salzburg native.

The wondrous world of Boris Johnson