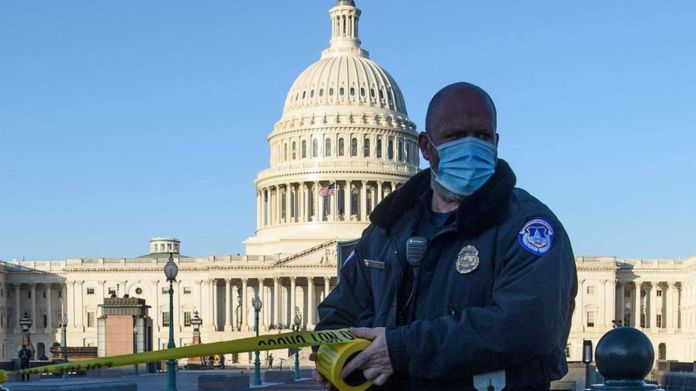 See in the video: Police chief resigns after storm on US Capitol.Following the storm on the Washington Capitol, the police initially reported four deaths: three people who had succumbed to medical emergencies and a woman who was shot by a police officer. On Thursday it was said in local media that one of the emergency services had also died of his injuries. In response to the incident, several units of the National Guard were positioned around the government building. The violent images from Wednesday evening inevitably raise the question of why the police could not avoid the angry crowd from entering the Capitol and causing damage. This Washington walker says: “I was surprised how quickly it all got out of control. I don’t work in security, so I don’t want to question anything, but you wonder how it could be – you could have foreseen it, he President has been tweeting for weeks that this is exactly what he wanted, so why weren’t they better prepared? ” Nancy Pelosi, the spokeswoman for the House of Representatives, also asked this question, criticized the FBI, called for a detailed investigation and the resignation of the police chief. Stephen Sund, chief of the Capitol Police, then submitted his resignation. Critics, including future President Joe Biden, point out in particular how different the law enforcement officers behaved in the summer during riots around Black Lives Matter demonstrations.

The Capitol Police had nothing to counter the attackers in the attack on the parliament building in Washington. She was apparently offered sufficient support.

After the storming of the Capitol by supporters of the elected US President Donald Trump, the police authority responsible for the security of parliament has come under massive criticism. The Capitol Police are accused from many quarters of not being adequately prepared for the attack by the violent mob following a Trump rally on Wednesday. According to the US media, the head of the security forces, Steven Sund, wants to resign on January 16.

The Associated Press is now reporting that the Capitol Police have apparently deliberately decided against reinforcements to protect the building. Three days before the attack on the Congress headquarters, the US Department of Defense asked the authorities whether they needed reinforcements from the National Guard, AP writes. And when Trump supporters attacked the symbol of the world’s most powerful democracy on Wednesday, Justice Department executives offered police support from FBI agents. The Capitol Police rejected both offers, AP reports, citing senior defense officials and two people familiar with the matter.

Despite numerous warnings of possible riots and ample resources and time to prepare for it, the Capitol Police had only prepared for one free speech demonstration, according to the news agency. In addition, the officials were still under the impression of the protests last June near the White House, when there was great excitement over the violent reaction of the law enforcement authorities. Therefore, the agency was careful to avoid any appearance that the government would use soldiers or the National Guard against Americans.

The devastating consequences are well known: when the Capitol was attacked, the security forces were completely overwhelmed and were simply overrun. Members of parliament and senators had to flee from the attackers and allow themselves to be brought to safety in front of the global public. Five people died in the riot, including a police officer. 56 police officers were injured. Two pipe bombs and six firearms were seized.

Delivery bottlenecks for IT products threaten well into 2021

There’s something on your ears – LS50 Collection available now

FC Bayern: Uli, take a look! Lothar is suddenly a...