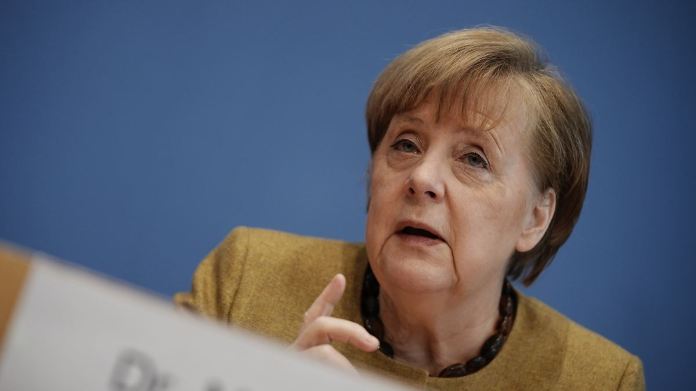 Chancellor Merkel has good news and bad news.  The  good: the infections are decreasing.

The  bad: With the mutated corona virus threatens a new danger.

The re is still time to slow down its spread in order to save itself in spring.
When Chancellor Angela Merkel comes into the rooms of the Federal Press Conference, it is summer or a crisis – because it is not everyday that she sits in front of the large blue wall of the capital journalists’ association and answers questions. It happened three times in the past year, the first year of the pandemic.

It’s not summer, so it’s about the crisis. She had come to explain her analysis and assessment of the situation. Germany is currently in a very difficult phase of the pandemic, “because we have a mixed picture”.

On the one hand, the number of infections has decreased and there are fewer people in the intensive care units. That is good news, because the aim has always been to prevent overloading the health system. “This shows that the tough cuts that people in Germany have had to take for weeks are beginning to pay off. And it basically shows that the effort is worth it.” Merkel emphasizes: “We know that this virus is an imposition for all of us.”

The n comes the but

On the other hand, the death rate is still alarmingly high. Today alone, the Robert Koch Institute reported more than 1,000 deaths. “

And there is a new threat – the mutated variant of the coronavirus. Findings so far would suggest that this virus is a major cause of the surge in infections in Ireland and the UK. This virus mutation has already arrived in Germany, but not in as many numbers as elsewhere.

The re is still time “to prevent the danger that lies in this mutated virus”.

That is Merkel’s central message, which is why she came: “We have to slow the spread of this mutation as much as possible,” she emphasizes. “We can still prevent that.” Her goal is to accelerate the decline in the number of infections before the mutated virus spreads further. Because it has already arrived in Germany:

The  mutated virus is already there, “we can’t get rid of that now, it’s all about slowing down the spread” in order to then “come into a slightly warmer season” and ” to have made further progress with vaccination “.

It is possible to offer every citizen a vaccination offer “by the end of summer”.

The  announcement made by the Federal Minister of Health Jens Spahn at the beginning of January that there would be a vaccination offer for all Germans “in the summer” has been subtly expanded: “In purely calendar terms, the summer will end on September 21,” says Merkel.

Despite the current delays in the Biontech vaccine, the Chancellor expects the quantity promised for the first quarter to be delivered. “I haven’t heard anything that this can’t happen.” Biontech’s partner, the US pharmaceutical company Pfizer, continues to ensure that the promised deliveries come.

The  fact that Pfizer has decided to ramp up production and that conversions would have to be made is “not objectionable”.

The  company Biontech emphatically protects them.

The re is no reason to criticize Biontech, on the contrary, “they are people who work day and night”.

The  Chancellor also defends the European vaccination strategy. It would not have helped Germany if it had been vaccinated here and not in other countries.

Border closings only as a last resort

At the same time, Merkel pleads for measures that are as equivalent as possible in the European Union, “because we are epidemiologically one area”. An EU video summit is taking place today for corona coordination.

Merkel answered evasively whether there could be border closings if there was no agreement at European level. She wants to avoid this as much as possible: “It’s not about introducing area-wide border closings,” she says. “But if a country with an incidence that is twice as high as Germany opens all its shops and we still have them closed, then of course you have a problem.”

The re should still be talks with Switzerland, she is already in talks with the Czech Republic – Merkel seems to be critical of the corona policy of these countries, which have high incidences.

The  aim is to contain the spread of the virus to such an extent that a reasonably normal life can take place again; Examples of this are Australia and New Zealand – states that do not have open borders with numerous neighbors. Merkel indicates that she cannot imagine that such a strategy would be accepted. Because that would also require shop closings if the incidence of 50 new infections per 100,000 inhabitants targeted by the federal government has already been reached in seven days.

As always at these press conferences, Merkel is also asked questions about her personal well-being. And as always, she doesn’t seem to be able to do much with it. Firstly, she has “very little time” to consider whether she feels any relief at the fact that her term of office will end in the fall. Second, you never know what will happen the next day. Her feeling is “tense attention and this is no different from the fifth day of my office”.

In any case, she does not regret the decision to run for another term four years ago, says Merkel.

The n she has a basic hint: “Perhaps the most important thing in politics is not to retreat to the path that has been found, but to analyze the situation wisely and ask whether something has to change” So far, in her opinion, she has been doing justice to this task.

According to good US job data, Dax significantly reduces losses –...

These candidates are ahead in research

Tractor convoy in Bochum stopped because of too many onlookers

This is how Liam Hemsworth’s girlfriend stays down to earth despite...

Country is checking FFP2 mask requirements in public transport and in...

Omar Mascarell (S04): The departure of Schalke could trigger a chain...