Weather Berlin:Cold and wet weather expected in Berlin and Brandenburg

Potsdam / Berlin (dpa / bb) – sleet, low temperatures, lots of clouds: in Berlin and Brandenburg it should stay cold, gray and uncomfortable. In addition to a thick cloud cover and maximum temperatures between two and four degrees, the German Weather Service (DWD) expects short sleet, rain or sleet showers locally on Wednesday. From the afternoon onwards, snow falls from Mecklenburg and spreads rapidly to the south. This can lead to slippery roads.

The DWD meteorologists also expected snowfall in some areas at a maximum of three to five degrees on Tuesday, and rain or sleet in the northern parts of the country. In the further course of the day the rain should then also spread in the other regions from the northwest, only in Niederlausitz snow was expected until the early afternoon. Loosening was possible from noon in the north, later also in the Berlin area.

VP Bank is examining IT outsourcing Florida: Unknown scratches “Trump” in the skin of a manatee

Pregnant Cheyenne Ochsenknecht is insulted in the net 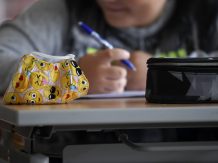 Package of measures: “Vienna is ready for school opening” – Coronavirus...