Thomas Gottschalk excited everyone at “Who steals the show from me”? – also Joko Winterscheidt. Image: ProSieben screenshot

“Who steals the show from me?”: Joko Winterscheidt bows to Thomas Gottschalk

Another triumph – and a win for the ProSieben program: The second edition of “Who steals the show from me?” convinced with funny quiz questions, gags and the quick wit of Joko Winterscheidt. The vacant presenter of the new format made show dinosaur Thomas Gottschalk a declaration of love.

Great entertainment can be so easy – even in Corona times, when everything has to be different: What you don’t need are excavator stunts, outside bets and arrogant US stars who would like to be brought back to the airport right away. With “Who steals the show from me!” Cardboard comrades with Joko faces sit in the audience. The audience applause comes unobtrusively from the tape. And the strong band “Mighty Winterscheidts” ensures a stirring atmosphere.

In any case, the trump cards are in the hands of the best-placed play candidates Palina Rojinski, Elyas M’Barek and presenter Joko Winterscheidt. And with grandfather’s grandeur, Thomas Gottschalk towers over everyone. It doesn’t take more for an all-round enjoyable Tuesday evening! Even the premiere of the new show, in which the at least larger half of the otherwise hardly separable duo Joko and Klaas also did well in a bourgeois jacket, scored with originality, clever quiz questions and good-mood teasing.

The second edition of “Who is Stealing the Show?” didn’t fall off. On the contrary: She almost had a lot more shit. Only the name of the program has apparently not even been memorized well by those directly involved. In the actually very simple warm-up question and answer session at the beginning of the show, everyone – except for actress Palina Rojinksi – failed because of the obvious answer. What is the name of this new program? Uh!

Another embarrassment for Elyas M’Barek? At first it looked like it …

Joko Winterscheidt was delighted to see his three celebrities and the 30-year-old audience candidate Asena taking apart. He was clearly hoping for another humiliation for Elyas M’Barek. In the opening sequence, the star actor had not exactly covered himself with fame, especially in the question and answer session “The Easy Five”. Later in the show, he was the first to retire. This time Elyas had been studying. “I’ve read books – with lots of letters.” But Joko continued to dig into the wound. He cheekily renamed the opening lap “The very easy five”.

The question was, “What is the name of the show you are currently on?” Gottschalk typed: “Steal the show from me!” Elyas M’Barek’s answer was also wrong: “Don’t steal the show from me!” Gottschalk then said: “If I had to remember every name of every show I am in”. Joko was almost shocked: “No, I’m not laughing, I’m broken inside!” Asena also typed wrong, she suggested the same name as Elyas. Ultimately, Palina saved the honor of the candidates: “Who is stealing the show from me!”, She typed and was thrown a kiss from the relieved Joko.

The new ProSieben program “Who is stealing the show from me?” is an entertainment hit. From left: Elyas M’Barek, Palina Rojinski, Thomas Gottschalk, audience candidate Asena from Unterföhring and Joko Winterscheidt. image: prosieben / maxbeutler

At first there were some signs of another embarrassment for the “Fack ju Göhte” actor. M’Barek was wrong when asked about the second grammatical case (genitive!). And his football expertise? Apparently very modest! But luck for him: Thomas Gottschalk took the pressure out of the game. The trained almost German teacher did not always have the right answer, but he still knows how to put a good gag out of nowhere.

Need an example? When geography knowledge was asked, Gottschalk knew that Canberra is the Australian capital. However, he refrained from showing off. Instead, to the general amusement, he picked himself up. “When I was in first grade, Australia wasn’t even discovered.” This is how you do it with grandeur!

The evening quickly turned into a nostalgic multi-generation meeting. The long-established entertainment greats felt like they were back in their childhood. Elyas M’Barek reported from home. Back then, Gottschalk’s ZDF classic “Wetten, dass ..?” the only program he was allowed to watch with his parents. “Really big fan”, he said – and Joko Winterscheidt was entirely of his opinion. Even more: Joko let through real admiration for the moderation role model Gottschalk. “The only reason we did this show was to play with you once,” he said to the 70-year-old colleague.

Thomas Gottschalk took two of “Who steals the show from me?” enjoy yourself on the shovel. picture: prosieben / max beutler

But the teasing Franconian didn’t just piss the boy off. Before it could get embarrassing, he’d rather joke himself again. “And then you throw me out,” he grumbled with mock indignation. But the score did not allow anything else. After the hall candidate Asena, Gottschalk was due for departure.

That left the two “Nightlife” actors: Palina Rojinski, who made it to the finals in the first show, battled a little with Elyas M’Barek. Then he passed unreachable. And Joko and Elyas ended up in the final battle.

It was exciting until the end. Joko Winterscheidt can not only moderate well, but also bluff well. That was especially important in the final round, the rules of which are difficult to understand. For the second time in a row, the moderator prevailed. “This is my show”, cheered Joko Winterscheidt. “And that remains my show.” Well earned!

In fact, it was even more important: Thomas Gottschalk will compete again for the third edition of the show. And not only the audience is looking forward to it. But also Klein-Palina, Klein-Elyas and Klein-Joko. After all, Winterscheidt recently had a sensational compliment on offer for Gottschalk: “What a crazy guy!” He cheered. “Still 1,000 times faster than any of us in our heads.”

Michael Wendler caused a big scandal at the beginning of October. He announced his “DSDS” -off and stated that he had made his decision on the basis of the Corona measures. Since then, nothing has been the same for the 48-year-old and his wife Laura Müller. Both lost numerous cooperation partners. In his Telegram group, the singer later stated: “I’ve lost millions of advertising contracts – I don’t care because I love people, love my fans and because …

BVB anger: warned of Union force – Fischer speaks of a...

Weather: Germany faces nights with temperatures as low as -10 degrees

Apparently a suitcase stolen: another attack on a money transporter in... 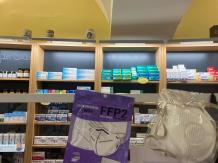