As the police only announced on Saturday, they had thrown the window pane with a stone on New Year’s Eve and took fireworks worth around 2,000 euros with them. When searching her apartment, the police found almost 27 kilograms of pyrotechnics. The two had ignited the rest on New Year’s Eve.

14-year-olds are considered to be of criminal age

The 14-year-old is now being investigated, his little brother is not yet of criminal age. According to the police spokesman, there is currently no evidence that the parents may have violated their duty of supervision. How the brothers brought their heavy booty home was initially unclear.

Corona drug: This product from Bavaria is supposed to protect against...

Schallenberg: patience with Turkey “as good as broken”

Violence in Myanmar: Dead and injured in new protests 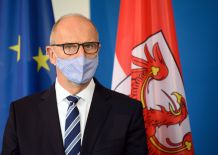 Ellen DeGeneres: The presenter has Covid-19