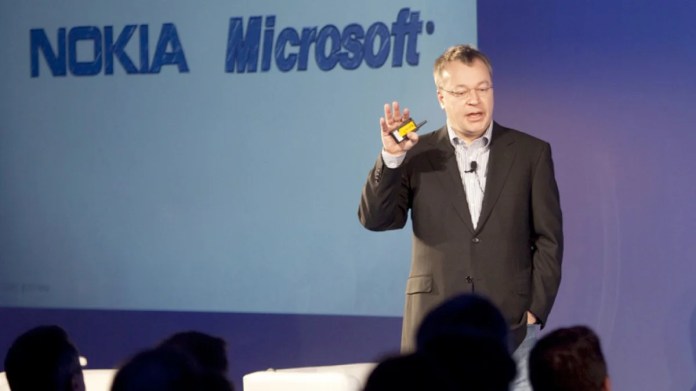 “Hello everybody.” Stephen Elop begins his internal memo with which he wants to swear the workforce of the world’s largest cell phone manufacturer to a hard change of course.  The  new CEO, who has just moved from Microsoft to the executive chair at Nokia, is supposed to cure the “Finnish patient” and make them fit for the future. This should succeed with Windows Phone of all things, the smartphone OS from Redmond, which is not exactly bursting with strength. Elop knows that he has to do a lot of convincing for this.

In his internal memo, which was passed through to the media, the former Microsoft manager didn’t gloss over anything. “We are on a ‘burning platform’ and we have to decide how to change our behavior,” wrote Elop, referring to several sources of fire. Nokia had simply tumbled on from its position of strength, while Apple and Android turned the market upside down with their ecosystems. Elop ordered the Finns to jump into the deep end.

Mr. Jobs has something new

Three years earlier, the smartphone world was different – and still okay for Nokia.

The  Finns were market leaders, the in-house Symbian was the system of the moment. Symbian ran on two out of three of the around 120 million smartphones sold this year.

The  two other relevant smartphone systems of the early years follow at a distance and each have a market share of around 10 percent: RIM’s Blackberry and Microsoft’s Windows Mobile. None of these platforms still play a role today.

In 2007 the signs could no longer be overlooked. At Macworld in January, Steve Jobs presented the iPhone, which went on sale in the US in the summer and was available in Europe from November. With the iPhone and the new iOS, Apple got a market share of five percent right from the start. At the latest then the alarm bells are ringing in Espoo, Redmond and Waterloo. But the establishment is too sluggish and not well prepared – and they colossally underestimate the new competitor.

The se guys are really, really good,” he is reported to have said to his co-CEO Jim Balsillie. But he just said: “It’s okay, we can do it.” You do not have.

If you close an eye and a half, Kallasvuo and Ballmer were somehow right with the “niche”. Although it is now a handsome niche, Apple did not take over the market in a coup. But the iPhone has not only rethought smartphones technically, it has also fundamentally changed the mechanisms of business. iPhone, iOS and the App Store launched in 2008 formed an ecosystem to which the established competition had no answer.

Another newcomer in the mobile phone business, who was just as criminally underestimated by the establishment, had it. In 2005, Google took over a small start-up that wanted to develop an operating system for digital cameras. Under the aegis of the search engine giant, the software company founded by Andy Rubin got a new mission: Instead of cameras, the system should run on smartphones.

At Nokia they also played down this new competitor. “Our Symbian operating system will remain the dominant system in the coming years”, Anssi Vanjoki was quoted as saying in 2009. “Android is above all a hype.”

The  Finns knew for a long time that they had a problem called “Symbian” – and were working on an alternative called Maemo. But diadoch fights and an oily corporate structure prevented a quick reaction. When the Finnish patient finally moves, it is already too late.

New Netflix series: This actress will be the new Sissi

The Waldhaus Flims, supported by Z Capital, announces a partnership with...

Donald Trump made 30,573 false statements in four years, according to...