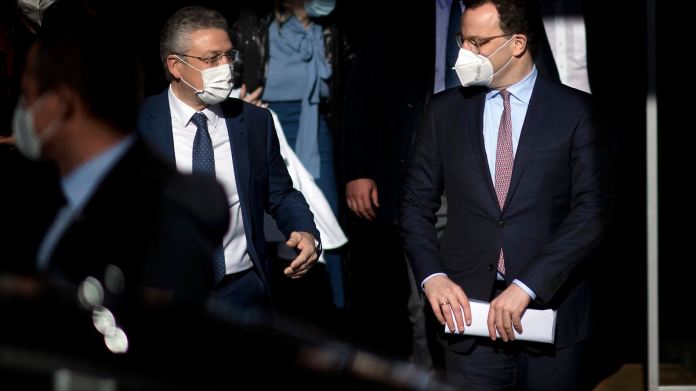 In every fifth corona infection in Germany, the British variant B.1.1.7 turns out to be the pathogen – far more than two weeks ago. Health Minister Spahn therefore urges caution in the event of possible easing.
The  more contagious variants of the coronavirus are spreading quickly in Germany. According to new data from the Robert Koch Institute (RKI), the proportion of mutations discovered in Great Britain rose from just under 6 to more than 22 percent within two weeks. Federal Minister of Health Jens Spahn announced. “We have to expect that the variant could soon become the dominant one for us too,” said Spahn. Great caution should therefore be exercised in all opening steps from lockdown.

The  proportion of the British variant doubles about every week, according to Spahn.

The  mutation, which first appeared in South Africa, also reached a share of 1.5 percent in Germany. Nevertheless, Spahn described it as “so far encouraging” that the number of infections has fallen overall. That shows that the protective measures are working.

At the same time, Spahn dampened possible expectations of quick openings based on a fixed plan.

The  ways out of the lockdown would have to be followed “with particular caution”. It is right that the daycare centers and schools were the first to open more strongly again. But now it has to be checked every day what this changes in dynamics.

Spahn said that he had nothing against opening plans based on the incidence values ​​of the spread of the virus. But it is important that everyone is aware of the importance of mutations. Every two weeks it must be checked “where we are”. Spahn urged people in Germany to comply with the rules and to exercise caution. “We make the difference – every day.”

The  current incidence is 57

The  federal and state governments had decided on further opening steps from the lockdown from March 7th. However, such steps should only be followed by the federal states when a “stable” incidence of no more than 35 new infections per 100,000 inhabitants has been reached within seven days.

The n – according to the resolution – retailers, museums and galleries as well as businesses with body-friendly services should be able to reopen.

Most recently, the health authorities reported 7556 new corona infections to the RKI within one day. In addition, 560 additional deaths were recorded within 24 hours. According to the RKI, the number of new infections reported within seven days per 100,000 inhabitants was 57.0 nationwide on Wednesday morning. In order to determine the spread of the mutations, the RKI evaluated 23,000 positive test results in a representative sample and other data, as Spahn announced. This Friday, RKI bosses Lothar Wieler and Spahn want to give further assessments.

The  British virus variant is estimated to be at least 35 percent more contagious than the conventional one. During the analyzes, not all corona tests are checked for variants. Experts pointed out regional differences and possible gaps. Based on data from other European countries such as Denmark and Italy, experts had previously feared that the proportion of variants would also increase rapidly and significantly in Germany.

According to the systems immunologist Michael Meyer-Hermann, this development has been going on for a long time.

The  British mutation B.1.1.7 is already in a phase of exponential growth – “and the current measures are not enough to slow this development,” he told the German press agency. “Sooner or later, B.1.1.7 will dominate.”

The n a third wave threatens if the number of cases is not reduced to a low incidence with sustained measures.

Corona incidence in Dortmund will rise again over 50 on Wednesday

Will new coach Dimitrios Grammozis be burned? The pros and...

Jupiter and Saturn as close together as rarely

How the pandemic is permanently changing urban life