Thanks to two more goals from Guido Burgstaller, FC St. Pauli has continued to catch up in the second division.  The  second change of coach at SV Sandhausen this season did not bring about the hoped-for turnaround.

The  downward slide of VfL Osnabrück continues unabated after the dismissal of coach Marco Grote.

The  Hamburgers defeated Darmstadt 98 3-2 (1-0) and celebrated their fourth victory in a row.

The  Austrian Burgstaller (26th, 82nd) ​​was even successful as a goalscorer in the seventh game in a row.

Omar Marmoush (62nd) scored the interim 2-0 for St. Pauli, which has now earned eight points on the relegation places after a messed up start to the season. Darmstadt, for which Tim Skarke (64th) and Serdar Dursun (66th) scored, on the other hand, simply cannot find its much-needed consistency: defeats and wins have alternated in the past few weeks.

The  team of coach Markus Anfang has to be careful not to slip further.

Both teams played bravely on Saturday and pushed for the opening goal from the start. But again it was Burgstaller who made it 1-0. After a nice combination, the former Schalke only had to push the ball over the line. Darmstadt stayed true to its offensive approach, but with all its commitment it rarely created a goal threat.

After the break, Darmstadt pushed for an equalizer. Tobias Kempe (47th) hit the bar with a free kick, Dursun (51st) and Immanuel Höhn (53rd) gave further opportunities. When Marmoush increased to 2-0, there was a lot to speak for the hosts’ victory: But Darmstadt was not defeated: In the final seconds alone, the Hessians missed the equalizer after a corner three times within seconds.

Under interim coach Florian Fulland, who was previously responsible for VfL’s A-youth team, the purple-whites conceded their eighth consecutive defeat with 1: 2 (0: 1) against 1. FC Heidenheim.

Tim Kleindienst (42nd) and Oliver Hüsing (50th) scored for the guests, who finished eighth with 32 points. VfL, for whom Christian Santos (88th) scored, is only two points away from the relegation place with 22 points.

Heidenheim went into the game aggressively and initially had the insecure Lower Saxony under control.

The  guests weren’t compelling enough, however, so that Osnabrück fought their way into the game – until Kleindienst came to the header after a cross from the right half-field and scored. Shortly after the break, this pattern led to another goal for Heidenheim – albeit from the left.

The  Hardtwälder slipped to a direct relegation place lost five days after the dismissal of Michael Schiele at Bundesliga relegated SC Paderborn with 1: 2 (1: 1).

Besar Halimi (15th) brought the guests, who are being looked after on an interim basis by trainer warrior Gerhard Kleppinger and long-time SVS professional Stefan Kulovits, into the lead. Paderborn turned the fighting game around with goals from Dennis Srbeny (36th) and Christopher Antwi-Adjei (74th), but as tenth with 30 points still has only theoretical chances of a direct Bundesliga return.

“My batteries are fully charged and I’m hot for the task,” said the 62-year-old Kleppinger before the game: “SC Paderborn is a ripped-off group. We have to watch our speed and counteract it.”

That worked well at first. Sandhausen bravely combined and, after a good teamwork, came with Halimi’s precise left-hand shot from the corner of the penalty area to the opening goal.

The n Paderborn woke up, after a long shot Srbeny scored a simple equalizer, the second goal of the Ostwestfalen fell through a dry conclusion from Antwi-Adjei in the corner.

Opera! Awards for Salzburg and the Vienna Philharmonic 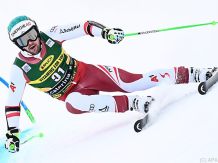 Kriechmayr in the Val d’Isere final training with the best time...