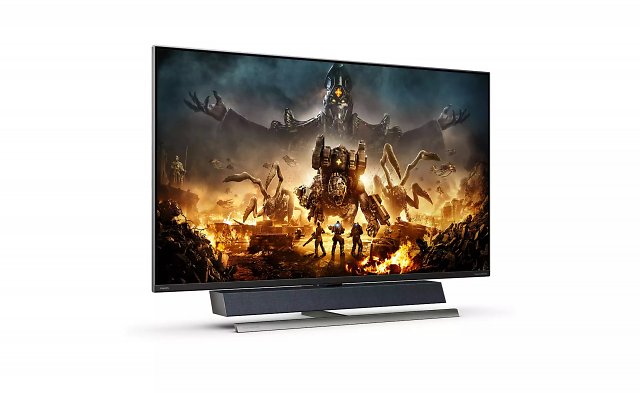 When Philips launched the Momentum 558M1RY monitor in the summer of 2020, quite a few were reminded of a TV set. This was not least due to the lush screen diagonal of 55 inches (approx. 140 centimeters). Now a successor is already in the starting blocks at Philips.

The  559M1RYV does not outperform its predecessors in all respects, but now offers an even higher refresh rate with 144 instead of 120 Hz. On top of that there is now the missing HDMI 2.1 and USB-C.

The  predecessor already offered the Ambilights known from the TV sector, only that these were renamed Ambiglow for the Momentum 558M1RY. Like the just announced Momentum 559M1RYV, it seems to be designed for use in the living room. According to Philips, the Momentum monitors process signals much faster than comparable TVs because they do not use smart apps.

More on the subject: Philips: New Momentum monitors in UHD with 120 Hz, but without HDMI 2.1

The  manufacturer left it open when the 144 Hz Momentum 559M1RYV will be launched. We have not yet had an official price recommendation.

The  predecessor is currently changing hands from around 1,145 euros. Against this background, it is to be expected that the Momentum 559M1RYV will hit at least in similar price regions.

Advertising: Discover the best monitors now at Alternate
Recommended editorial contentHere you will find external content from [PLATTFORM]. To protect your personal data, external integrations are only displayed when you confirm this by clicking on “Load all external content”:

PCGH Plus: Ampere and Big Navi finally make it possible:

The  4K / UHD resolution and a high frame rate are no longer a mutual contradiction. 4K and 120 Hz screens are now required.

DSDS: New season starts – with Michael Wendler in the jury

Coronavirus rages in the senior center in Linden – Dramatic call...