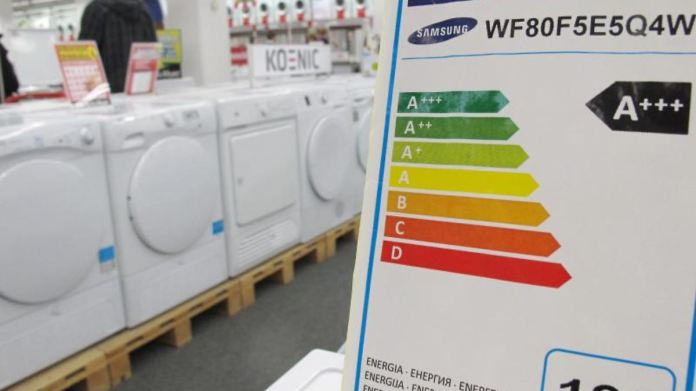 Many electrical appliances look quite economical, at least at first glance: there are up to three pluses in the “A” top class of the EU energy label. Because this is confusing and outdated, there will soon be new categories.  The  changes at a glance.
From March 1st, there will be new energy labels for certain electrical devices.

The re will be new classifications, but the EU energy efficiency labels should still show how economical the household helpers are. Classifications such as “A ++” or “A +++” are being replaced by more understandable classifications for dishwashers, washing machines, refrigerators and freezers, televisions and monitors – but there are still reasons for citizens to look carefully:

What is changing for consumers?

The  European consumer organization BEUC welcomes the innovation because customers benefit from clearer and more reliable labeling. “To see that the new label will soon replace the old one is a victory for consumers,” said the organization. According to your statements, there were no more appliances in the lower old classes, so that an “A +” refrigerator was de facto one of the most inefficient on the market.

The  consumer advocates also point out that there will be both old and new labels in the future because the new rules do not initially apply to all products.

The y recommend only looking out for new labels when in doubt, as these are more accurate.

What new labels are being introduced and why?

The  previous scale remains, but the categories are given different names – now from “A” to “G”.

The  EU Commission justifies the reform by stating that more and more energy-efficient products are being developed, but the difference between the classes “A ++” and “A +++” is less obvious to consumers.

The  Federal Association of Consumer Organizations (VZBV) has a similar view: It was hardly possible to assess which types are really more efficient.

What do the new efficiency classes mean?

Nothing changes in the basic principle: Furthermore, there should be a color scale from dark green (very good) to red (very bad), which enables a quick orientation of how energy efficient a product is.

The re are different calculation bases depending on the product category. In the case of refrigerators, efficiency is measured, for example, by how much they fit and whether they have a freezer compartment. But the repair effort is also included.

Can consumers convert the new classes one to one?

No. You cannot simply convert the categories. Previous “A +++” devices come in category “C”. Most top class devices come in “D” and some even only manage “E”, according to the vzbv.

The  new class “A” should initially remain completely empty so that manufacturers have an incentive to innovate.

What devices is it about?

Specifically, it is initially about five product groups: refrigerators, dishwashers, washing machines, electronic displays and lamps. Incandescent bulbs and other light sources will not be re-labeled until September 1st. BEUC’s consumer advocates criticize the fact that the new names for many devices come later. Boilers and heaters, for example, would not have the not so new labels until 2025.

What are the duties of retail?

As of March, the new labels must be physically attached within 14 working days and labeled on the Internet.

Edeka, Rewe, Real: call back! THESE snacks can cause poisoning

Investors are nervous about the coming week

Current figures from December 23: Corona in the Harburg district: Two...

Corona: Vaccinations for all over 80s from February | NDR.de...

Declaration of love to his wife Ann-Kathrin under family photo

Physiotherapy in times of corona: fears despite pain

Bosnia – shocking images from refugee camps: Thousands have to go...