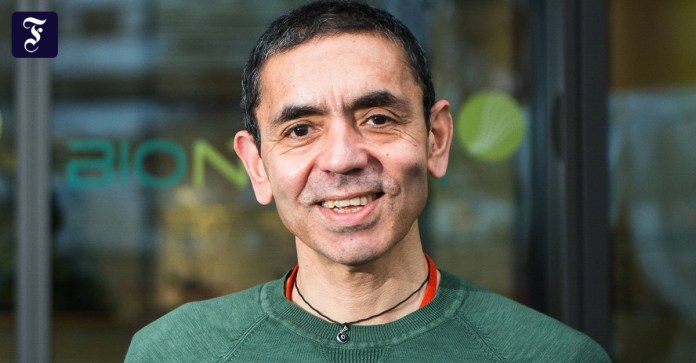 When people look back on how the world defeated the corona pandemic in ten years’ time, Uğur Şahin will probably be one of the first names to fall.  The  Biontech founder was the first to defeat the virus with his vaccine – not just for himself, but for billions of people around the planet. As a scientist. And as an entrepreneur.

On the one hand, it is now known how this came about. On the other hand, it is fascinating when Şahin talks about it himself. He lets himself be connected to the DLD digital conference from his home in Mainz, gives a brief greeting, starts his presentation – and then reports. About how he read a report on an “outbreak” in China in January last year. How he realized it was a serious disease. About how he discovered that Wuhan is a tightly knit city within China and that it has an international airport that handles 2,300 flights in a week – so it was clear that the disease would certainly not stay in China.

And about how he and his wife and the Biontech company decided to develop an antidote, a vaccine. “We weren’t experts on the virus, but we were experts on the immune system.” On the weekend when they read the first comprehensive study of the outbreak in Wuhan, they started to peel through the literature.

That they weren’t experts on the virus initially changed quickly, in record time. Şahin analyzed the precursors of the current virus, identified possible vaccine candidates, and selected a few of them for initial clinical tests. And internationally; he worked with Pfizer in the United States and Fosun in China. Without a global collaboration, he emphasizes this several times, the historic achievement would not have been possible.

Şahin not only created an approved vaccine in record time, but also with a new process, using so-called mRNA technology. Not in years, but in months. In November the time had come and the results made headlines – not only because of the speed, but also the effectiveness of the active ingredient. Şahin became a superhero.

Now he is in the middle of the next challenge. Biontech was able to produce 25 million doses of mRNA last year, this year it should have been around two billion in the end. He shows a slide that makes it clear how this works – in that countless companies work together, some of which otherwise compete with each other.

The re are names like Novartis, Sanofi, Merck, Evonik, Pfizer or Baxter.

The  mutations that have occurred so far have not worried him too much, he says. Mutations are always a part of it, especially when so many people are infected – it doesn’t surprise him at all. So far there is no “super variant” that is resistant to the existing vaccines.

He also spreads confidence when it comes to how quickly Germany is making progress in vaccinating its citizens. In the past two months, more people have been vaccinated (around 3.2 million) than have ever been infected with the virus. Every day, the number of those vaccinated exceeds that of the newly infected many times over – not a very common statistic, but the one that at least Şahin sees as his confidence.

“We started with a remedy for a single individual and in the end had one for all of humanity,” he recalls what they originally dealt with at Biontech, with personalized treatments for cancer. In the time before the pandemic. In the time before Uğur Şahin and his wife Özlem Türeci were superheroes.

Bill Gates on Corona Conspiracy Theories: “Something New for Me”

Theologians for euthanasia in church institutions

Football EM 2021 in Vienna? UEFA does not deny this