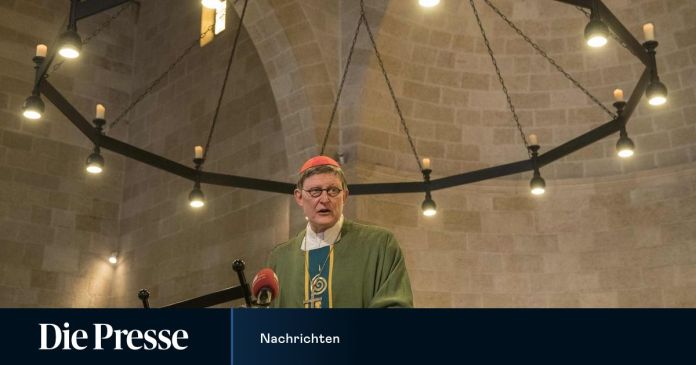 The  German Bishops’ Conference has to contend with allegations of abuse and cover-up.

The n the news that the theologian Gilles is to succeed the clergyman Langendörfer as general secretary comes at just the right time.

The  German Bishops’ Conference began on Tuesday with turbulence and criticism, and the German bishops made headlines in the afternoon with historical news. Because for the first time they have elected a woman as their general secretary.

The  theologian Beate Gilles will succeed the clergyman Hans Langendörfer at the beginning of July, the bishops’ conference announced in a broadcast on Tuesday. “I see this as a strong sign that the bishops are meeting their promise to promote women in leadership positions,” said conference chairman Georg Bätzing.

Gilles was previously responsible for children, youth and family in his diocese. “I’m looking forward to the new job,” commented Gilles on the choice. Since this year she has also been the federal chairwoman of IN VIA Germany, the Catholic association for social work for girls and women. In addition, she sits on the broadcasting council of the German state for the Hessian dioceses.

Observers viewed the surprising election as an attempt by the German bishops to venture into an affair to cover up abuse scandals. In this regard, the Archbishop of Cologne, Rainer Maria Cardinal Woelki, was caught in the crossfire.

The  Limburg Bishop Bätzing had also accused his colleague of wrongdoing. He had openly blamed Woelki for mistakes.

Provocative sculpture in front of the cathedral

The  start of the digital general assembly of Germans Episcopal Conference Tuesday was marked by protests across the country. In front of the Cologne Cathedral, the large sculpture “

The  Acorn Bishop” by the Düsseldorf artist Jacques Tilly will be exhibited for three days, which is intended to depict “the negative effects of church sexual morality”, as the organizers announced.

The  provocative sculpture had already been seen on Rose Monday in Düsseldorf.

The  action on Cologne’s Domplatte was organized by the Giordano Bruno Foundation as well as several affected associations such as the “Angular Table”. In addition, the art installation “

The  long bench of the abuse scandal” is shown in the cathedral city. According to the organizer, the work of art is an allusion to this Promise of the abuse officer of the Episcopal Conference, Stephan Ackermann, not wanting to put anything on the back burner.

Supporters of the Maria 2.0 movement throughout Germany also want to draw attention to their demands for church reforms with seven theses on cathedral and church doors. With their “theses”, a reference to the church reformer Martin Luther, the Catholics demand, among other things, a gender-equitable church, the elucidation and fight against the causes of sexual violence and the abolition of compulsory celibacy.

“That Luther is said to have nailed his theses to the door of the castle church in Wittenberg is more of a legend, but his theses set something great in motion,” says a declaration by Maria 2.0.

The  reform movement has the same goal with its protest “

In their first digital general assembly, the 68 members of the Episcopal Conference advise on the abuse scandal and also on the problem of leaving the church. Last year, the bishops had to report more people leaving the church than ever before, and a particularly large number of Catholics are currently leaving the Archdiocese of Cologne, which has been criticized.

Pope Francis sent the Episcopal Conference however, a call for forgiveness.

The  Apostolic Nuncio, Archbishop Nikola Eterovic, warned in a letter to the German bishops about the negative power of conflicts. He was alluding to the rift between the bishops over the issue of dealing with cases of abuse.

Greetings from the Pope: “Be kind to one another”

The  Episcopal Conference published the Pope’s greeting just before the meeting began. “Every kind of bitterness and anger and anger and shouting and blasphemy with all evil banished from your midst – be kind to one another, be merciful, forgive one another, just as God also forgave you in Christ”, is the quoted passage from Paul’s letter the Ephesians.

The se words would apply to all Christians “and thus also to the members of the Germans Episcopal Conference“, wrote the archbishop sent by the Pope to Germany as a representative. He wrote with a view to the corona pandemic and its consequences for the church, but also with a view to sexual abuse and the continuing resignations:”

The  Catholic Church is also located in Germany yourself in a crisis. ”

Google smartphone: The Pixel 5a is getting bigger and has two...

Delivery problems at AstraZeneca – Anschober: “This is a real setback”

Australian Open: Berrettini injured – Tsitsipas without a fight in the...

Frankfurt: Fear of the rent increase

Corona vaccine Sanofi – France is waiting for its own vaccine

Alpine skiing: Franz also at the forefront in the second Val...