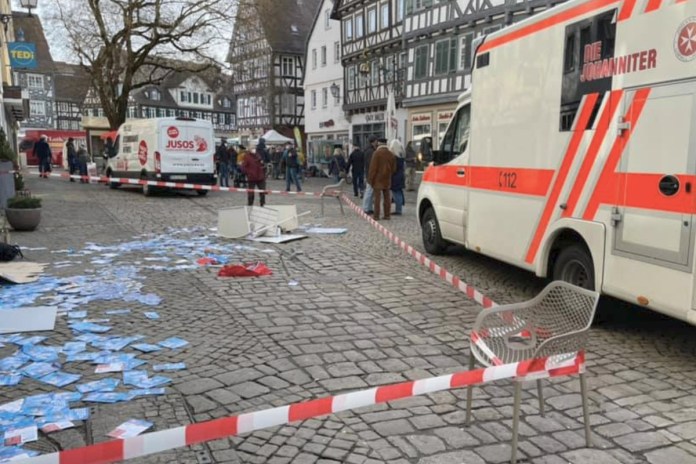 An AfD stand was attacked in Schorndorf in Baden-Württemberg. A politician was taken to hospital injured.

As the Stuttgarter Zeitung reported, the AfD state parliament candidate in the Schorndorf constituency, Stephan Schwarz, was injured. He was taken to the hospital with a suspected concussion.

Schorndorf’s Lord Mayor Matthias Klopfer announced on Facebook: “I condemn today’s attack on the AfD candidate Stephan Schwarz and his supporters at the Schorndorf weekly market in the strongest possible terms. Violence must never be a means of political conflict. I am shocked and appalled … ”

The  city administration will of course do everything necessary to clarify the situation and the city security service, together with the police, will do everything in the coming weeks to ensure that such an incident does not repeat itself and that the state election campaign can take place without restrictions.”

The  AfD spoke of “around 20 left-wing extremists” who were responsible for the attack.

The  police meanwhile announced that the AfD had set up an information stand on the Schorndorf market square as part of the upcoming Baden-Württemberg state election, which was attacked by a group (15 to 20 people) around 10 a.m.

The  attackers were activists from the anti-fascist scene, which was evident from the flags and banners they were carrying. A 36-year-old AfD politician is said to have been torn to the ground and beaten by the attacks. He first tried to dial the emergency number with his cell phone. But one of the attackers snatched the phone from him and apparently stole it.

The  information booth was completely destroyed.

The  police temporarily arrested five suspects. According to the police, you are between the ages of 18 and 25.

Spotify: Password resets due to over 300,000 publicly available credentials

Ronaldo “would have liked to play in Germany”

Did McDonald’s shrink portions because of a Sudden Viennese? “Leadersnet

Luke Letlow: US MP (41) dies of coronavirus five days before...